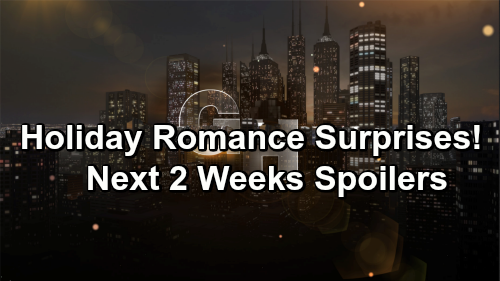 General Hospital (GH) spoilers for the next two weeks from December 24 to January 4 tease that some warm moments are coming up in Port Charles. We should point out that a repeat episode will air on Monday and Tuesday’s episode will be preempted for sports coverage. However, there’ll still be plenty of action during the week of December 24-28.

For starters, the bond between Michael (Chad Duell) and Willow (Katelyn MacMullen) will grow stronger. She’ll confide her baby drama to him and get some support in return.

That’ll bring a deeper connection for the pair, but Chase (Josh Swickard) will remain her top boyfriend candidate for now. Something tells us that’ll change eventually, so give this love triangle some time to heat up.

Other General Hospital spoilers say Christmas will come a little late for Julian (William deVry). He’ll get a visit from someone and feel his heart glowing with the holiday spirit. Will Kim (Tamara Braun) do something special for “Charlie” or will it be Alexis (Nancy Lee Grahn) who reached out again? Either way, Julian should appreciate what’s in store.

Over with Olivia (Lisa LoCicero), she’ll make a startling discovery. Could this involve another murder Ryan (Jon Lindstrom) commits or will it be something less gruesome? Either way, GH spoilers say Olivia will be taken aback. Kristina (Lexi Ainsworth) will also make a significant choice, so that may involve sinking further into Daisy’s (Kelsey Wang) creepy world.

Later, General Hospital will give us some New Year’s Eve party fun. Chase and Willow will ring in 2019 with a kiss, but they probably won’t be the only ones! There’s a good chance Jason (Steve Burton) and Sam (Kelly Monaco) have another lip lock brewing. Some other pairings may share smooches, too.

The week of December 31-January 4 will start off with a classic GH episode. General Hospital will air a show from 1997 on December 31 and there’ll be a preemption for more sports coverage on January 1.

Current new GH episodes will resume the following day, Wednesday, January 2, when Drew (Billy Miller) nudges Kim toward Julian. He may feel like she needs to get her own life back on track since Oscar’s (Garren Stitt) hopefully improving.

Of course, Kim and Drew are also growing closer. She may find herself longing to spend more time with him instead! Over with Sonny (Maurice Benard), he’ll try to provide a distraction for Mike (Max Gail). If Mike gets hung up on Yvonne (Janet Hubert), Sonny may hope to steer his dad’s attention to other things.

Other General Hospital spoilers say Liz (Rebecca Herbst) will meet with Willow. She’ll want to get in touch and talk about the bullying issues at Aiden’s (Jason David) school. Liz hopes Charlotte’s (Scarlett Fernandez) apology will be the end of it, but she’ll remain fearful. As Aiden’s teacher, Willow will have to keep a close eye on the situation.

Meanwhile, Chase will do a little teaching of his own. He’ll be the instructor of a self-defense class, so it sounds like some fun scenes are looming. Maxie’s (Kirsten Storms) breakfast date with her baby boy should bring some fun, too. Perhaps Peter (Wes Ramsey) will end up joining Maxie and James for some eggs and OJ.

General Hospital fans won’t want to miss the great episodes ahead. We’ll give you updates as other GH news comes in. Stay tuned to the ABC soap and don’t forget to check CDL often for the latest General Hospital spoilers, updates and news.