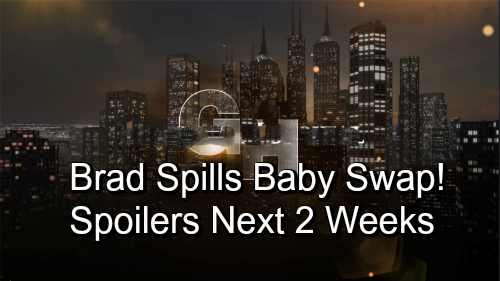 General Hospital (GH) spoilers for the next two weeks tease that the action’s about to heat up in Port Charles. During the week of October 29-November 2, Anna (Finola Hughes) will extend an offer to Britt (Kelly Thiebaud). She’ll need Britt’s help to draw Liesl Obrecht (Kathleen Gati) out of hiding, so she’ll make this deal simply irresistible.

Will Britt gain freedom in exchange for her cooperation? Time will tell, but Finn (Michael Easton) won’t like his part in the plan. It looks like he’ll reluctantly pitch in, but it’ll go against everything he believes in. Over with Cameron (William Lipton), he’ll make a shocking find. Since his story revolves around Oscar (Garren Stitt) and Josslyn (Eden McCoy), his discovery will probably relate to one of them.

Oscar seems to be getting mixed up in a cult, so there’s a chance Cameron will realize something’s amiss. He’s not the brightest kid in Port Charles, but red flags could still be raised. Meanwhile, Franco (Roger Howarth) will kick off a Halloween party for the kids in town. Nina (Michelle Stafford) will also enjoy a lovely dinner with her ex, so Valentin (James Patrick Stuart) should make some progress.

The week of November 5-9 will deliver even more chaos. GH fans can expect a threat to surface for Ned (Wally Kurth). He’ll get a phone call that’s rather eerie, so he may worry about what’s in store. Perhaps Ryan will try to stir up some fear and give Laura (Genie Francis) a better shot at becoming mayor. It’d be in Ryan’s best interest for her to win. That’d just mean more free time to run amok!

Elsewhere, General Hospital spoilers say Terry (Cassandra James) will open up to Liz (Rebecca Herbst). She may be concerned about Oscar (Garren Stitt) and his push for emancipation. If Oscar succeeds and turns down the trial, death is inevitable. Terry will just wish there was a way to change the sick teen’s mind. This experimental treatment is Oscar’s only chance at survival.

At least Oscar will have some pals to rely on. Unfortunately, they may not be the right ones! Oscar’s new roomies will probably welcome him with open arms, but what kind of crowd will he be hanging with? Probably not a great one!

As for Brad (Parry Shen), he’ll be stuck in the same old mess. Brad will battle more guilt about “Wiley,” so he’ll confide in Britt. She’ll most likely learn some of the baby swap details, so Brad should be glad to get it off his chest. Nelle (Chloe Lanier) will pull some funny business from behind bars soon, so Brad had better brace for trouble.

Finally, Carly (Laura Wright) will spot something truly troubling. Will Ryan’s body count start piling up? Could Carly discover the next victim? We’ll give you updates as other GH news comes in. Stay tuned to the ABC soap and don’t forget to check CDL often for the latest General Hospital spoilers, updates and news.