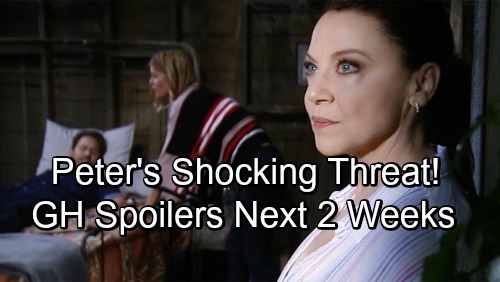 General Hospital (GH) spoilers for the next two weeks tease that some stunning developments are on the way. During the week of July 2-6, Maxie (Kirsten Storms) will feel torn about Peter (Wes Ramsey). Part of her hates Heinrik’s guts and another part of her just wants to know he’s all right. Maxie will ask Sam (Kelly Monaco) for clues about Peter’s whereabouts, but Sam still has work to do.

Later, Peter will give Liesl (Kathleen Gati) a stern warning. He’ll probably suggest that she’s going to pay for this. Peter will continue to bounce between lashing out and flat-out begging, so stay tuned for all the cabin drama. Meanwhile, Josslyn (Eden McCoy) will give someone an apology. She overreacted during her last chat with Oscar (Garren Stitt), so she’ll undoubtedly want to make this right.

Nelle (Chloe Lanier) will also turn on the charm on this week’s new GH episodes, July 2-6. Who will she deceive this time? Nelle could really stand to get that cologne back, so she’d be wise to work something out with Oscar. However, that may not be the case since Ava (Maura West) will smell a familiar scent down the road. If Nelle tries to get the cologne back, it’s clear that she’ll fail.

Perhaps Nelle will continue her charming act with Michael (Chad Duell) or Monica (Leslie Charleson) instead. The week of July 9-13 will bring that Ava whiff we mentioned as well as another shocker for Nelle. She’ll be rattled the same day Michael apologizes. Perhaps their engagement announcement will make waves and force Michael to smooth things over.

Later, Nelle will hit another obstacle while Nina (Michelle Stafford) faces one of her own. Valentin (James Patrick Stuart) will seek the truth and GH fans know he won’t stop until he finds it. General Hospital spoilers say Nina will weave a tangled web, but Valentin will quickly tear through it. He’ll suspect that Nina’s story is bogus and he’ll be exactly right.

Nina will desperately try to keep Valentin out of the loop on Peter and the cabin chaos. Unfortunately, Dr. O could put the whole plan in jeopardy. She’ll face a surprising distraction, so that could mean good news for Peter. Will he have a chance to escape? It sounds like Peter may at least be able to try!

Over with Mike (Max Gail), he’ll lend a sympathetic ear to Stella (Vernee Watson). She may open up about her “Jurtis” engagement objections. Stella would really like to drive Curtis (Donnell Turner) Jordan (Vinessa Antoine) apart, but she could battle some guilt about it eventually.

Finally, Sonny will get Mike ready for the future. This might involve preparing Mike for his decline and the next steps they’ll have to take. Then again, it could involve some Croton corpse mayhem. Sonny still needs answers before it’s too late!