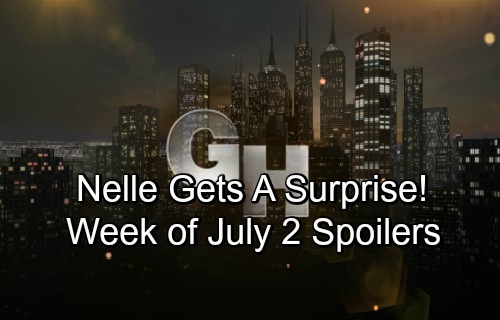 General Hospital (GH) spoilers for the week of July 2-6 tease that some surprises are in store. It sounds like Nelle (Chloe Lanier) will get the first one. She’ll be taken aback by something Michael (Chad Duell) does, so perhaps he’ll get her an engagement ring. He has to make this seem legit! With any luck, Nelle will get too comfortable and slip up.

Meanwhile, Sonny (Maurice Benard) will get some good news. Jason (Steve Burton) will likely have a positive progress report to pass along. Thanks to Jason’s work with Sam (Kelly Monaco) and Spinelli (Bradford Anderson), Carly (Laura Wright) will be one step closer to her release

General Hospital spoilers say Sonny will once again offer reassurance. He may stop by Ferncliff again to keep Carly’s spirits up. Meanwhile, Liz (Rebecca Herbst) will get a huge shock. A friend from Liz’s childhood will show up on her doorstep, but she’ll look a bit different.

Cassandra James will debut in the role of Terry, an old pal who is now transgender. Word has it Terry was Liz’s first kiss, so Franco will be jealous when he hears about their reunion. He’ll breathe a sigh of relief when he meets Terry and learns there’s no threat to his relationship.

Some Independence Day celebrations will also be going on this week, July 2-9. GH spoilers state that a Cameron recast will debut during one of them. Cade McWatt will take on the role, so expect him to hang out with Josslyn (Eden McCoy) and Oscar (Garren Stitt) at the park.

Elsewhere, Sam and Jason will share some warm moments on the footbridge with Danny (T.K. Weaver). After the fireworks, Sam will continue to move out of Drew’s (Billy Miller) orbit. She knows a clean break is for the best, so she’ll stick to that plan.

Over with Peter (Wes Ramsey), he’ll see light at the end of the tunnel. Peter will finally have some hope for freedom, but it may be delayed. As tough as it is, he’ll just have to be patient. Valentin (James Patrick Stuart) will get close to the truth soon, so at least that could work in Peter’s favor.

Finally, Julian (William deVry) will have big dreams for the future. He’ll share his expansion plans with Kim (Tamara Braun) and hope that things work out. General Hospital spoilers say some exciting episodes are coming up, so don’t miss all the fun.

Which storylines are you looking forward to the most this week? We’ll give you updates as other GH details emerge. Stay tuned to the ABC soap and don’t forget to check CDL often for the latest General Hospital spoilers, updates and news.