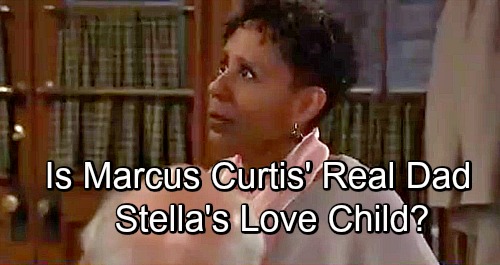 Stella looking within herself, wonders what would have happened if life had happened differently—much like Sonny Corinthos’ (Maurice Benard) experience, only she is awake and it’s not a dream – at least GH fans don’t think that it is.

Several weeks ago Jordan Ashford (Briana Nicole Henry) had a discussion with Curtis Ashford (Donnell Turner) about giving Auntie Stella her own love life by trying to track down her lost love Marcus. Unfortunately, when she found him she also found out he had been happily married for over 30 years!

However, GH spoilers indicate that somehow Stella sees Marcus in Kelly’s, and the preview scene (see video below) seems to indicate it is random. Jordan wouldn’t have set something up knowing that Marcus is happily married.

Perhaps in conversation Marcus may bring up that his wife has recently passed, or she is terminal in hospice or like Mike Corbin (Max Gail) she has Alzheimers and he has had to place her in a care facility. In short, Marcus’s significant other may very well be out of the picture.

Since Stella is a social worker, and she deals with grief counseling and nursing home placements, this may bring Marcus back into her orbit for a time.

Past General Hospital spoilers have teased and many fans have speculated that Stella’s Marcus is actually Marcus Taggert (Real Andrews) and that he and Stella had a love child – who is none other than Curtis! The latest GH buzz suggests that Mr. Godfrey is a different Marcus, but could Curtis be THEIR love child? Marcus is not an uncommon name but still this appears to be quite the coincidence.

Will Stella and Marcus reunite? Will she tell him about his son, Curtis, that she had many years years before? Stay tuned to GH and keep checking General Hospital spoilers to see if Marcus does turn out to be Curtis’ father and Stella’s past not being so squeaky clean!