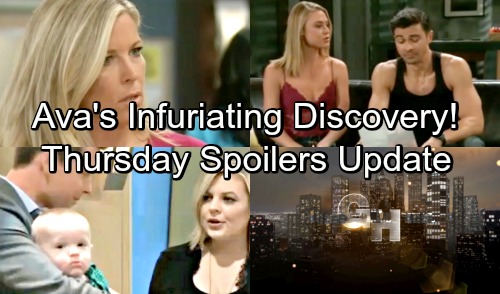 General Hospital (GH) spoilers update for Thursday, September 20, tease that Mike (Max Gail) will open up to Stella (Vernee Watson). He’ll hope she can get Sonny (Maurice Benard) to let him go, but Stella may have a different point of view. Sonny needs to make peace with Mike moving out of the house, but that doesn’t mean they can’t continue their relationship. There’s still time to enjoy their newfound bond.

While Stella advises Mike, Sonny will have a conversation with Jordan (Briana Nicole Henry). General Hospital spoilers say Jordan will have some words of caution. She’ll note that the walls are closing in, so Sonny may need to take precautions. He doesn’t want Mike getting caught in the human remains mess or facing consequences for the explosion.

At Charlie’s Pub, Julian (William deVry) will try to shield Sam (Kelly Monaco) from more pain. He won’t like the idea of his daughter getting sucked back into Jason’s (Steve Burton) danger. Julian will imply that Jason should love Sam enough to leave her out of it. He’ll do his best to offer Sam some protection, but she wouldn’t approve. Sam’s a big girl, so she can make her own choices.

Ava (Maura West) will also speak with Julian in Thursday’s episode. GH fans can expect Ava to get riled up again, but she’ll seemingly shift most of her rage to Griffin (Matt Cohen). It appears Nina’s (Michelle Stafford) advice will sink in, so Ava may not want Griffin’s betrayal to ruin her relationship with Kiki (Hayley Erin).

As Ava makes her way over to Kiki’s apartment, Griffin will connect with Kiki on the couch. Due to that pesky air conditioning problem, they don’t have a ton of clothes on. That should cause some serious issues once Ava arrives. She’ll see red when she realizes they’re together and somewhat stripped down.

General Hospital spoilers reveal that a nasty argument will break out. It sounds like Ava, Griffin and Kiki will all have a chance to vent. At GH, Michael (Chad Duell) and Maxie (Kirsten Storms) will share a sweet moment. Although it’s painful on some level, Michael still likes hanging out with the babies around town. Holding them brings him comfort, even if there’s some sadness underneath it.

Michael will give James some cute attention, so Maxie will praise his paternal side. She’ll assure Michael that when the time’s right, he’s going to be an awesome dad. Of course, Brad’s (Parry Shen) just hoping Michael never finds out Jonah’s alive. His secret could become tougher to keep thanks to “Wiley’s” heart condition.

A test showed something disturbing, so Lucas (Ryan Carnes) and Carly (Laura Wright) will bring Brad up to speed. The doctor will want to monitor “Wiley’s” heart closely in the coming weeks. It’d be good to have info from “Wiley’s” biological father in a case like this. If Lucas and Brad have to seek additional information, the baby swap scheme could start to unravel.