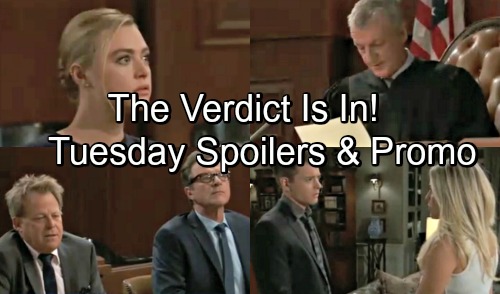 General Hospital (GH) spoilers for Tuesday, August 14, tease that Franco (Roger Howarth) will have a fierce faceoff with Ava (Maura West). He knows she’s hurting right now, but it looks like he intends to deliver a stern lecture anyway. Franco will shout that it’s only a fraction of what she deserves and it’s long overdue.

It’s understandable that Ava would be furious over Griffin (Matt Cohen) and Kiki’s (Hayley Erin) sex session. However, Franco may not think that gave her any right to tank Kiki’s case. Dr. Bensch (James DePaiva) still targeted Ava’s daughter, so he’ll think that should mean something to her. Besides, Ava slept with Morgan (Bryan Craig) and doesn’t have much room to talk!

At GH, Liz (Rebecca Herbst) will talk to Griffin (Matt Cohen) about the sexual harassment trial. She’ll get the feeling that something happened, so Griffin will spill the whole ugly story. Liz will hate that Kiki’s facing an even tougher battle now, but she’ll hold out hope for a victory.

In the courtroom, the jury will eventually come back with a verdict. As the judge gets ready to read it, Kiki will be incredibly nervous. She’ll want Dr. Bensch to pay for his actions, but she’ll definitely worry that her hookup might’ve messed up her chances.

Other General Hospital spoilers say Robert (Tristan Rogers) will try to squeeze information out of Valentin (James Patrick Stuart). He’ll wonder if Anna (Finola Hughes) and Finn’s (Michael Easton) disappearance is connected to Valentin in any way. Robert’s desperate to get some answers, so he’ll want Valentin to spill anything he might know.

Meanwhile, Finn and Anna will have questions as well. It turns out Cassandra Pierce (Jessica Tuck) is the mystery patient, but who wants to bring her out of her coma? Anna will push for answers and try to figure out how they’re going to get out of this jam. Healing Cassandra won’t be easy, but Finn had better do it if he wants to keep Anna alive!

Other General Hospital spoilers say Carly (Laura Wright) will bring up a difficult topic with Michael (Chad Duell). She’ll realize this isn’t something he wants to discuss, but she’ll think they need to do it anyway. Carly will suggest that it’s time to plan a funeral for Michael’s son Jonah. She’ll promise to support Michael as they remember Jonah and mourn the tragic loss.

Of course, Jonah is still alive and kicking across town. Brad (Parry Shen) is pretending the kid’s “Wiley,” so that bomb’s sure to drop down the road. We’ll give you updates as other GH news comes in. Stay tuned to the ABC soap and don’t forget to check CDL often for the latest General Hospital spoilers, updates and news.