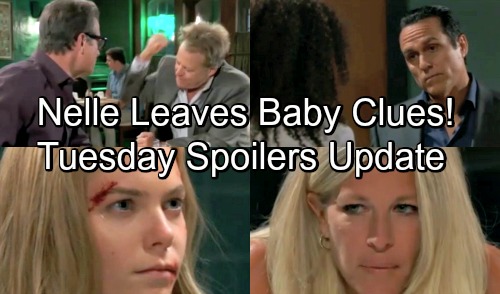 General Hospital (GH) spoilers for Tuesday, August 7, tease that Carly (Laura Wright) will be nothing but confident. She knows securing her freedom isn’t a done deal yet, but she’s counting on Sonny (Maurice Benard) and Jason (Steve Burton) to make it happen. They’ll definitely work hard to get Carly off the hook soon.

At the police station, Jordan (Vinessa Antoine) will continue to face Sonny’s pressure. He’ll reiterate his plan to go public if she doesn’t help Carly. The media would spread the word about Ferncliff’s shady practices, so the PCPD could get caught in the scandal. After all the drama with Peter (Wes Ramsey) and Liesl (Kathleen Gati), that would certainly add to Jordan’s list of problems.

Jason will also try his luck with Margaux (Elizabeth Hendrickson) in Tuesday’s new GH episode, August 7. He’ll want her to do the right thing and fix Carly’s mess. Jason will hope his evidence is enough to get the job done, but more proof is coming. Thanks to Julian’s (William deVry) sneakiness, Michael (Chad Duell) just stumbled across the missing baby blanket in the Quartermaine nursery.

Sam (Kelly Monaco) will realize this is exactly what Carly needs. She’ll tell Michael to hurry over to the cops and turn the blanket in ASAP. Michael will likely do just that, but Nelle (Chloe Lanier) and Carly will face off in the meantime. General Hospital spoilers say they’ll exchange insults and attempt to provoke each other.

Carly will enjoy having the upper hand for once, but Nelle will feel like she’s getting the last laugh. Even though Nelle’s seemingly headed to prison, at least she’ll leave behind some baby chaos. That should give her some satisfaction as she’s locked up for her crimes.

At GH, Griffin (Matt Cohen) will acknowledge Ava’s (Maura West) softer side. He’ll see how worried she is about Kiki (Hayley Erin) and the looming court case. General Hospital spoilers say Griffin will praise Ava for being a concerned mom. He’ll add that he loves her, which is exactly what Ava wanted to hear.

Across town, Scott (Kin Shriner) will propose a new strategy to Dr. Bensch (James DePaiva). He’ll think settling the case is the way to go, but the doc will turn him down flat. Dr. Bensch has no intention of admitting or implying guilt. He’ll insist that he needs an attorney who’s truly in his corner. If that’s not Scott, Dr. Bensch will be willing to find another lawyer.

Scott will quickly assure Bensch that it was just a suggestion. He’ll state that he’s going to do whatever he can to win, but he’ll clearly be fibbing. Ava’s paying Scott double to throw the case, so he’ll have to sabotage this carefully. Since Scott’s in the loop on Griffin and Kiki’s sex session, that’ll put him in a real bind.

Scott will spread the hookup news to Franco (Roger Howarth) later this week, but Alexis (Nancy Lee Grahn) will grill Kiki for now. General Hospital spoilers say Kiki will keep her dangerous secret. She’ll tell Alexis that she knows everything she needs to know, so a courtroom disaster awaits!

GH has some tricky moments in store, so don’t miss all the drama. We’ll give you updates as other details emerge. Stick with the ABC soap and don’t forget to check CDL often for the latest General Hospital spoilers, updates and news.