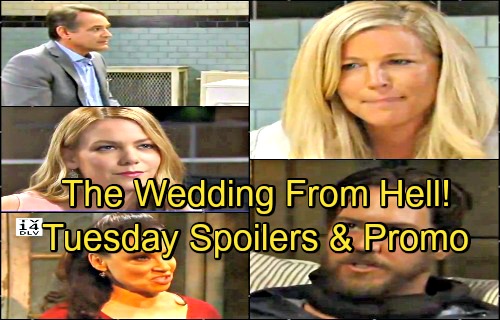 General Hospital (GH) spoilers for Tuesday, July 10, tease that Franco (Roger Howarth) will have some questions for Finn (Michael Easton). GH fans know that Wyatt (Patrick J. Gibbons) rushed to the hospital and quickly pointed the finger at Liesl Obrecht (Kathleen Gati). He let Franco and Finn know she tied someone up in the woods, so they intend to find the cabin he’s held at.

However, it seems Franco will wonder about Finn’s motives. The notebook tipped the guys off to the hostage’s identity. They assume it’s Peter (Wes Ramsey), so Franco may ask why Finn’s so determined to help. Of course, Finn may feel like it’s his duty as a doctor. Besides, he’d love the chance to take Dr. O down for this!

Later, General Hospital spoilers say Liesl will lash out at someone. It may be Finn since she’ll refer to this visitor as a stalker! They were just fighting at GH, so Liesl should want Finn to butt out and back off. Meanwhile, Peter will keep preying on Nina’s softer side. He’ll reiterate that if she lets him go, he won’t implicate her in this mess.

Elsewhere, Sam (Kelly Monaco) will find a clue and promptly fill Curtis (Donnell Turner) in. Has she discovered something that could point in Peter’s direction? The walls are closing in on Liesl, so she’d better be prepared for trouble.

Across town, Michael (Chad Duell) will give Jason (Steve Burton) updates on his wedding date. It turns out the big event’s happening soon – VERY soon. Nelle (Chloe Lanier) made the arrangements, so they’re all set to get married tomorrow on a new GH episode July 10. Sonny (Maurice Benard) will get the scoop as well and it looks like he’ll attempt to calm Jason’s fears. They need to have faith in Michael and trust this will work out.

Meanwhile, Chase (Josh Swickard) will try to get inside Nelle’s head. He’ll contend that this marriage to Michael isn’t going to work and start listing all the reasons why. Chase might argue that Carly (Laura Wright) will eventually go free and Nelle will be right back where she started. He may add that Michael’s just marrying Nelle because of the baby anyway.

Chase could suggest that Michael will come to his senses once the tot’s a bit older. He might even bring Nelle’s side into this and insist that she’ll get bored with a man like Michael. Will Chase push himself as the better option? Whatever the case, Nelle should walk away from his conversation with doubts.

At Ferncliff, General Hospital spoilers say Carly will rant about Nelle’s destruction. She’ll state that Nelle’s someone she could’ve fought in her sleep. Instead, Carly tried to suck it up and deal with her for the baby’s sake. Unfortunately, Nelle played dirty and her ruthless accusations landed Carly in this miserable place.

Kevin (Jon Lindstrom) will let Carly vent before offering advice. He’ll hope he can keep Carly calm and focused on proving she’s sane. We’ll keep you posted as other GH news comes in. Stay tuned to the ABC soap and don’t forget to check CDL often for the latest General Hospital spoilers, updates and news.