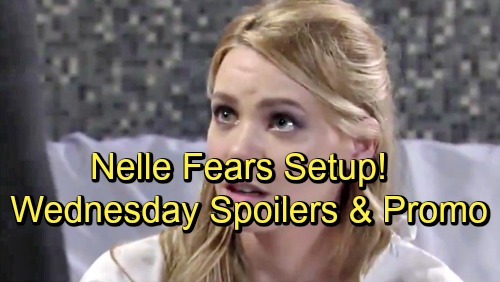 General Hospital (GH) spoilers for Wednesday, July 18, tease that Valentin (James Patrick Stuart) will demand answers from the bartender. This guy also happens to be an actor, so he helped Nina (Michelle Stafford) by posing as a CDC agent. Valentin will rough him up a bit and ask who he works for. It looks like Valentin will realize Nina’s his boss soon enough.

Meanwhile, Peter (Wes Ramsey) will wonder what’s in it for Nina. She’s going to a lot of trouble to help Liesl Obrecht (Kathleen Gati). Peter may not see how all this is really worth it. He can’t imagine a satisfying ending to this plot, but there’ll certainly be an exciting conclusion for GH fans! General Hospital spoilers say Dr. O will set the cabin on fire by the end of the week, July 20.

For now, Sam (Kelly Monaco) and Curtis (Donnell Turner) will turn to Liz (Rebecca Herbst) for help. They’ll reveal that they have a few questions about Franco (Roger Howarth). Curtis and Sam are working hard to crack the case of missing Peter, so anything Liz can share would be appreciated.

However, it turns out Franco’s stuck in dangerous faceoff. Obrecht caught up with him down by the docks, which means chaos is about to erupt. Franco will push Dr. O to come clean and accept his assistance. He’ll feel like he can get her out of her current jam.

Unfortunately, Liesl will have other ideas! She’ll smash something over Franco’s head and rush back to her hostage. Liesl will realize she has to act fast or she’ll find herself sitting behind bars. At Charlie’s Pub, Julian (William deVry) will have some bad news for Kim (Tamara Braun). He’ll suggest that things just got more complicated, so this might be about those delayed permits Jason (Steve Burton) ordered.

While Julian mulls over his stalled expansion plans, Nelle (Chloe Lanier) will fret at GH. Once Chase (Josh Swickard) stops by, he’ll manage to prey on Nelle’s fears. General Hospital spoilers say Nelle will open up about the conversation she heard. Michael didn’t care about her kiss with Chase at all. Nelle found that highly suspicious, so she’ll wonder if Michael might be setting her up.

Chase will undoubtedly support that theory, which means Nelle will have a big decision to make. It appears she’ll ultimately resolve to murder Michael, but she’ll need Chase’s help. Too bad he’s working with the enemy! Nelle’s in for several shocks at the end of this exciting storyline.

Finally, Sonny (Maurice Benard) will want the scoop. He’ll urge Michael to fill him in on the details of his plan, but will he get the whole story? Jordan (Vinessa Antoine) and Chase want Michael’s parents out of the loop. It’s awfully cruel, but Michael may keep a few secrets about his faked death scheme.