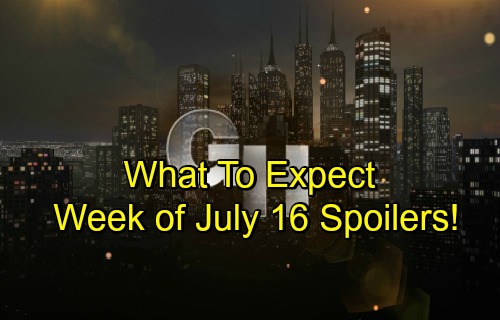 General Hospital (GH) spoilers for the week of July 16-20 tease that Port Charles will face plenty of drama. First, it looks like Ava (Maura West) will sidestep Griffin’s (Matt Cohen) questions. Will he suspect that Ava and Nelle (Chloe Lanier) are keeping a few secrets? Griffin will get a bit pushy, so he may try to pry the truth out of Ava. He really needs to worry about his own scandalous secret!

GH fans know that Kiki (Haley Erin) and Griffin hooked up after the Nurses Ball. They’re hoping to keep that news under wraps, but Scott (Kin Shriner) could be a big problem. In the meantime, Liz (Rebecca Herbst) will express praise Kiki for her strength and determination. She’ll feel confident that things will go Kiki’s way in court, but maybe she shouldn’t be so sure.

Other General Hospital spoilers say Valentin (James Patrick Stuart) will solve a mystery. He’ll put the clues together and most likely realize Peter’s (Wes Ramsey) being held in Wyndemere’s stables. Valentin will have a tricky task on his hands. He’ll undoubtedly hope he can save Peter without enraging Nina (Michelle Stafford) again. Perhaps Valentin will come up with a strategy to end this peacefully.

It appears Maxie (Kirsten Storms) could get the scoop soon, too. General Hospital spoilers state that she’ll sense something’s off this week. Maxie may feel like Nina’s hiding something about Peter. Will she urge her to reveal his whereabouts? Even if Maxie doesn’t find out the whole story just yet, she’s on the verge of it.

Elsewhere, Franco (Roger Howarth) will decide he’s been too trusting. He seemingly bought Liesl Obrecht’s (Kathleen Gati) tall tale at the cabin, but his suspicions will rev back up. General Hospital spoilers say Franco and Dr. O will have a stunning showdown, so stay tuned.

Meanwhile, Carly (Laura Wright) will deal with some unpleasant ramifications. Thanks to her Ferncliff escape, Carly will undoubtedly face tighter security. She’ll probably lose all her privileges as well. That means Carly could be cut off from those critical visits with Sonny (Maurice Benard). Carly counts on those to get through this nightmare, so losing them could leave her reeling.

Over with Jason (Steve Burton), he’ll battle some anxiety. Between Carly’s suffering and Michael’s (Chad Duell) dangerous plan, Jason will have a lot to worry about. He’ll hate seeing his loved ones stuck in such horror.

Jason will eventually determine that he can’t wait around any longer. Will he do something drastic to improve Carly’s situation? Is this about protecting Michael instead? GH viewers won’t want to miss the shockers and shakeups. We’ll give you updates as other details emerge. Stay tuned to the ABC soap and don’t forget to check CDL often for the latest General Hospital spoilers, updates and news.