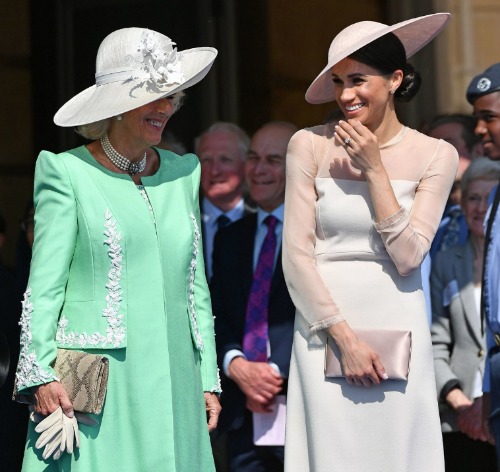 Prince Charles has a rather unusual nickname for his daughter-in-law Meghan Markle. According to new reports, Charles likes to call Meghan “Tungsten” behind closed doors and that’s because he admires her tough character.

Prince Charles feels that Meghan Markle is exactly what his son Prince Harry needs, especially since he tends to be a “softy” at times. The future King of England likes that Meghan is an intelligent, poised, and hard-working person who has a lot to contribute to the royal family.

One royal expert told The Mail on Sunday, “Prince Charles admires Meghan for her strength and the backbone she gives Harry, who needs a tungsten-type figure in his life as he can be a bit of a softy. It’s become a term of endearment.”

While there is no doubt that Meghan Markle has managed to win over her new father-in-law, the same can’t be said about Prince Charles’ relationship with Prince William’s wife, Kate Middleton. Even though the Duchess of Cambridge has been in the royal family for several years now, no one has ever mentioned Charles’ nickname for Kate. But then again, there might be a good reason behind it.

Many reports have indicated that Prince Charles often feels frustrated that Prince William and Kate Middleton spend so much time with the Middletons, but not enough time with him and Camilla Parker-Bowles. After all, if there is one person who is going to teach Prince George, Princess Charlotte and now Prince Louis everything they need to know to be dedicated royals, it’s him.

But Prince William and Kate Middleton insist on spending more time with her family and giving their kids a normal upbringing. Of course Prince William can’t forget that Camilla Parker-Bowles was ‘the other woman’ who helped destroy Princess Diana’s marriage.

So it’s no wonder that published reports claim that Prince Charles has grown to like Meghan Markle more than Kate Middleton. With the way things look now, he has a better chance of growing closer to Prince Harry and Meghan Markle’s future children than the grandchildren he has now.

If that weren’t enough, Meghan supposedly told Harry that he should invest more in her relationship with Prince Charles. Even though she is no longer close to her own father Thomas Markle, Meghan reportedly told her husband that Charles has been nothing but warm and welcoming to her and she made it clear that he should appreciate him and bond more.

In the meantime, don’t forget to check back with CDL for all the latest news and updates on Prince Charles, Meghan Markle and the rest of the royal family right here.