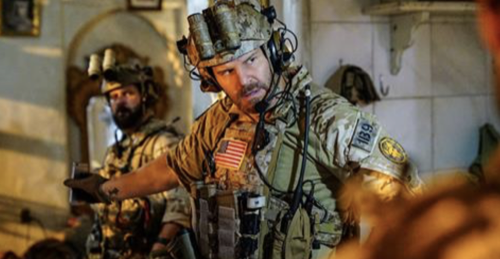 Tonight on CBS their new military drama Seal Team airs with an all-new Wednesday, January 3, 2018, episode and we have your Seal Team recap below.  On tonight’s Seal Team season 1 episode 10, “Pattern of Life,” as per the CBS synopsis, “Tensions are high when Jason and the SEAL Team enter a Yemeni house to locate a cell phone linked to a terrorist network, and interrogate the family while the daughter lays in critical condition after being accidentally shot.”

Its 4 am in Yemen as a teenage girl studies at her desk. A mother sleeps on the floor along with a father and son. A dog barks, waking the father. He looks out the window and doesn’t see anything. He gets his gun and readies it as he grabs his phone and makes his way out of the room. He makes his way down the stairs to the front door. He sees a shadow under the door. The Seal Team breaks in. The daughter comes out into the hallway. They shoot her dead. The father yells her name over and over. The rest of the team makes their way through the house, rounding up the mother and boy. Jason calls into headquarters to inform them, “target secured.” He shuts the front door.

The daughter continues to bleed out on the floor as they take the father away. Clay is upset about shooting the daughter. Jason tells him he made the right call and now he needs to get his head back in the game. They clear off the kitchen table, putting the daughter on there to work on her. He strings up an IV to the kitchen light.

Ray heads to see the father. He tells them they are looking for a phone. Jason thinks he found it. Ray checks. It isn’t it. Jason tells the father he needs the phone and then he can bring the daughter to the hospital. Meanwhile, Sonny looks around. He finds a handful of SIM cards and checks them. They aren’t it either. Jason demands to know where the phone is but the father insists he doesn’t have any other phones.

Jason checks in with Eric, Amanda, and Davis. He informs them of the girl and that he cannot find the phone. They pinged the phone to that address an hour earlier but have since lost the signal. The general gets on the line. He wants them to keep looking. The phone is linked to a terrorist recruiter.

Jason and Ray go to talk to the mother. They need to test her blood to see if she is a match. Her daughter needs a transfusion. The mother cries and screams. They have the wrong house. She finally agrees and heads downstairs. She sees the pool of blood on the floor and begins to cry.

Amanda and Davis talk. They cannot believe the general doesn’t seem to care too much about the girl possibly dying.

Ray questions the mother while Clay draws her blood. Jason talks to the father about a terrorist magazine he found. The father insists he didn’t know he still had it. A friend gave it to him after one of their medical facilities was bombed by a US drone. He does not agree with violence. The wife corroborates the story.

Jason talks with Davis. They notice lights outside the home. Jason locks the doors. They wait. A man tries to come in. They drop him to the floor. He has a gun. They question him. He is the cousin of the wife. He just came back from Morning Prayer. He has a gun because he was robbed last week. They check his phone. It isn’t a match. Jason sends his picture to Amanda. He doesn’t seem to fit their profile.

They question the mother again. They let her see her daughter. After she tells them what she knows about her nephew. Meanwhile, Sonny questions the young son to see if he knows where there is a phone. He explains that they cannot help his sister until they get the phone. The boy brings Sonny to a downstairs sink where there is a cell phone in a sink drain in a plastic zipped bag. He tells Sonny that the phone is his.

Jason asks the mother about the phone. She tells them that the phone is hers. They call it in to Amanda. They try to unlock the phone with the fingerprints of the mother and the father. It does not work. The other tries to take the blame for the phone but Jason isn’t buying it. He realizes after interrogating the young son that the daughter is the one who owns the phone. They check her fingerprint on the id pad. It is a match. The mother tells them that she is just a young girl. Bleeding on the table, she tells them all she is a soldier of God. The mother screams. Jason and the team take her with them on a stretcher.