The Bold and the Beautiful Spoilers: Bill Not Above Using Will To Silence Wyatt – Katie Plays Long Game

BY Sean O'Brien on May 16, 2018 | Comments: Leave Comments
Related : Soap Opera, Spoiler, Television, The Bold and the Beautiful 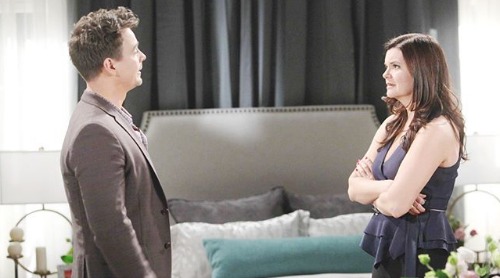 The Bold and the Beautiful spoilers tease that Katie (Heather Tom) will aggressively insist that Wyatt (Darin Brooks) abide by Bill’s (Don Diamont) request to remain mute. B&B fans recall that he was prepared to pull the Will (Zane Alexander Achor) card when Watie said they were going to marry. Now that a real threat to his Dollar Still plan exists, Bill will follow through on his threat to take full custody of Batie’s son.

Wyatt couldn’t believe what he overheard. Justin (Aaron Spears) and Bill were shouting about the Dollar Still ruse.

No, Steffy (Jacqueline MacInnes Wood) wasn’t still involved with Bill as Wyatt thought he discovered. Instead, Justin had been tasked by Bill with creating a fake scene that would be relayed to Liam (Scott Clifton), which it was.

Wyatt happened to see Bill hugging Steffy in the hallway at Spencer Publications, which was very odd. However, the one-night-only couple was only embracing because Steffy was grateful to Bill for having overlooked Taylor’s (Hunter Tylo) back shot. Wyatt didn’t hear that part of their earlier conversation.

While Liam was presented as Bill’s shooter, Taylor stunningly admitted that she actually used the golden gun. That led to Diamont’s great character opting to overlook what happened, but also telling Steffy that she owed him one. The price she paid was in then signing Steam’s annulment papers, which Liam recently sent by messenger to be filed.

Okay, readers, take a B&B breather while this scribe stretches his fingers and thumbs. Good. Whew, that recant was a lot to digest during our self-imposed pause. Nevertheless, it’s only part of this twisted, yet deeply engaging storyline.

Sensing the time was right, Bill engineered a lie exactly when Liam had convinced himself to give Steam another try. Wyatt told his brother about Dollar Still’s seeming existence, Liam was disgusted and Hope happened by at her mom’s log cabin. That is a weird setting for this particular show by the way, right?

Lope reconciled and got engaged last week and are rushing toward a Brooke- (Katherine Kelly Lang)-pushed marriage in the next few days. That’s lightning bolt icon fast-forward, even for this soap.

Wyatt had it out with his dad. Bill listened before raising his voice and then grabbing his apparent heir apparent by the arm, hard.

Wyatt was told in no uncertain terms, at first, to keep his trap shut. Later, Bill softened his stance, realizing that his son wasn’t responding to weak-position threats.

Upon telling Katie all that happened, Tom’s character will suggest what Bill’s next step will be. He’ll attempt to take Batie’s son away from her in retaliation if Wyatt spills to Liam. Wyatt knows that type of consequence could easily happen. Thus, another sharply written daytime dilemma has been presented. So, what comes next?