BY hellodrdavis on December 1, 2018 | Comments: one comment
Related : Soap Opera, Spoiler, Television, The Bold and the Beautiful 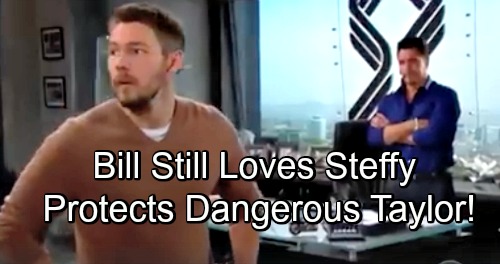 The Bold and the Beautiful (B&B) spoilers tease that Taylor (Hunter Tylo) will have a lot of forces working against her in the coming days. Liam (Scott Clifton) has already voiced his concern to Steffy (Jacqueline MacInnes Wood) about the potential danger of Taylor being alone with Kelly (Zoe Pennington). And Liam has chosen to spill the beans about Taylor shooting Bill (Don Diamont) to Hope (Annika Noelle).

Of course, once Hope knows about Taylor shooting Bill, she’ll run right to Brooke (Katherine Kelly Lang) and inform her of Taylor’s deed. This will leave Taylor vulnerable, with several people liable to turn her in to the police.

In the coming new B&B episodes this week, December 3-7,, various people will make the rounds to see Bill about the matter. According to B&B spoilers, Liam will have a chat with Bill about Taylor. It seems that Liam will be worried that Taylor might still be angry with his dad and try to harm him again. Liam will think that his dad has been through enough this past year and won’t want to see him hurt any further.

But Bill will reassure Liam that everything will be ok. Sure, Taylor is testing his patience right now, but he trusts Steffy to reign Taylor in. This may not fully satisfy Liam, but he’ll probably figure that since Bill was the one who got shot, then he’s the one who should decide what to do (or not do) about Taylor.

Next, Brooke will pay Bill a visit. She’ll be shocked to learn from Hope that Taylor is the one who shot Bill, and she’ll visit Bill to find out what he’s going to do about it. Of course, since Brooke can’t stand Taylor and has a soft spot for Bill, she’ll probably be hoping that Bill will fill the police in on what Taylor did.

Of course, Bill will play the “changed person” card for Brooke because he’s trying to woo Brooke back right now, but that’s probably not the real reason why Bill is keeping Taylor out of trouble with the police. Bill made a promise out of love for Steffy to protect Taylor, and he wouldn’t hurt Steffy by breaking that promise. A part of Bill likely still loves Steffy.

Sure, Bill has dropped his active pursuit of Steffy and has moved on to Brooke, but do you think that he still loves Steffy? Stay tuned to the CBS soap and don’t forget to check CDL often for the latest Bold and the Beautiful spoilers, updates, and news.