The Bold and the Beautiful Spoilers: Brooke Still Furious About Lope Demise – Unleashes on Scheming Bill

BY hellodrdavis on June 18, 2018 | Comments: 3 comments
Related : Soap Opera, Spoiler, Television, The Bold and the Beautiful 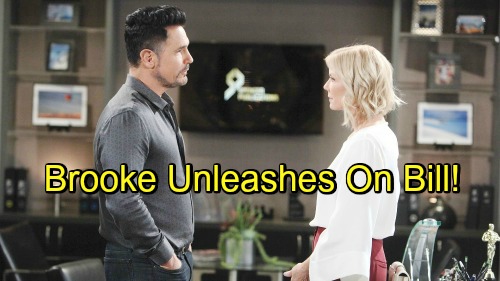 The Bold and the Beautiful spoilers tease that Brooke (Katherine Kelly Lang) may not be over her disappointment in how things turned out for Hope (Annika Noelle) and Liam (Scott Clifton). Hope called off her engagement to Liam when it was essentially clear that Liam was going back to Steffy (Jacqueline MacInnes Wood).

Brooke wanted a Lope marriage very badly, and she was extremely disappointed that Hope was left out in the cold in this love triangle. And it looks like she’s going to have a hard time letting her disappointment go. The Bold and the Beautiful spoilers say that Brooke will confess to Ridge that it’s hard for her to be happy given what happened between Steffy, Liam, and Hope.

But Brooke’s a fighter, and her disappointment will turn to rage! She’s not shy about blaming others for depriving her daughter of happiness. She already viciously blamed Steffy for taking Liam, and she blamed Wyatt (Darin Brooks) for interrupting Lope’s wedding ceremony. But now her rage is going to be directed elsewhere…at Bill (Don Diamont).

Bill, of course, is the person whose actions caused the recent Steffy-Liam-Hope triangle. B&B spoilers say that Brooke’s going to lash out at Bill and demand answers from him about how he could harm his (and her) family in the way he did. It’s all been bottling up for Brooke for a while now, so we may see her really let Bill have it. She may point out that Bill uses his children like pawns and manipulates them so he can selfishly get what he wants.

Knowing Brooke, she’ll definitely be heard, but it probably won’t make much difference in what Bill actually does going forward. B&B spoilers say that he’ll continue to meddle and manipulate, so whatever Brooke says may just go in one ear and out the other.

Will Brooke’s angry words get through to Bill at all, or at least give him pause? Or will Bill just keep on being Bill? Stay tuned to the CBS soap and don’t forget to check CDL often for the latest Bold and the Beautiful spoilers, updates, and news.