BY Heather Hughes on June 17, 2018 | Comments: one comment
Related : Soap Opera, Spoiler, Television, The Bold and the Beautiful 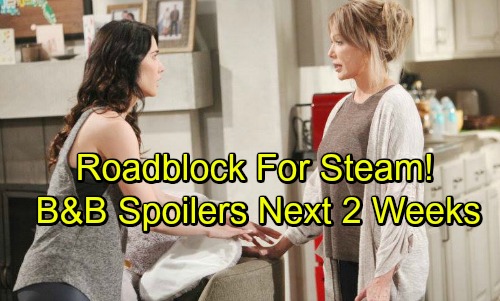 The Bold and the Beautiful (B&B) spoilers for the next two weeks tease that some desperate moves are coming up. The week of June 18-22 will bring Bill’s (Don Diamont) last-ditch effort to keep Liam (Scott Clifton) and Steffy (Jacqueline MacInnes Wood) apart. He’ll do his best to blow up their engagement with some blackmail, which means Steffy’s sure to be livid.

Later, Taylor (Hunter Tylo) will drop by to see her daughter. She’ll have some worries she wants to open up about. Taylor may mention the shooting and Bill’s decision to keep quiet. Perhaps Taylor will fear being exposed and going to prison. She couldn’t exactly take Bill’s word for it when he said he’d stay silent, so the threat’s always going to be there.

Once Taylor divulges how afraid she is, Steffy may feel guilty about standing her ground. Will she cave in at some point? Bill will certainly hope so! In the meantime, Maya (Karla Mosley) will accuse Emma (Nia Sioux) of being a spy. She’ll find out Emma’s last name and assume Justin (Aaron D. Spears) sent his sneaky Barber niece for dirt.

The Bold and the Beautiful spoilers say Maya will fire Emma, but Justin will arrive soon after. He’ll object to Maya’s choice and Hope (Annika Noelle) will back him up. She won’t see why Emma should lose her job over this. Over with Wyatt (Darin Brooks), he’ll heat things up with Sally (Courtney Hope) and convince her to stick around. Wyatt will just want to make sure no guns are involved from now on!

Other B&B spoilers state that Xander (Adain Bradley) will face questions from Julius (Obba Babatunde) and Maya. He’ll be deceiving the Forrester clan about a few things, so they’ll wonder if that’s really the best idea. Back with Sally and Wyatt, they’ll get caught making out. The week of June 25-29 will let Quinn (Rena Sofer) and Eric (John McCook) in the loop on their steamy bond.

It sounds like Wyatt will once again have a meddling mom. Quinn can never stay out of his love life, so Sally needs to be ready for a fight. Speaking of fights, The Bold and the Beautiful spoilers say Brooke (Katherine Kelly Lang) and Bill will have a big one. She’ll want some answers about all his recent ruthlessness.

Brooke just won’t get why Bill hurts the people who care about him – or at least the ones who used to. She’ll be appalled over the way Bill hurt Steffy, Liam and Wyatt. Of course, Brooke will mostly be upset about her own daughter. Hope got caught in the fallout, so she’ll give Bill an earful for that.