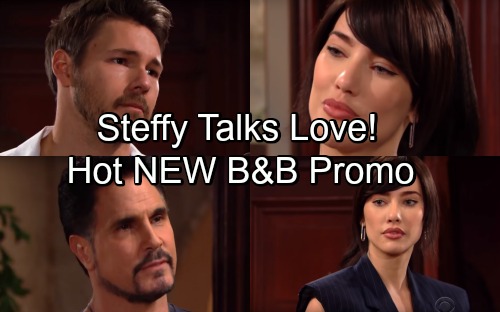 The Bold and the Beautiful (B&B) spoilers and hot new promo for the week of August 6-10 tease that we’ll see some startling shifts on the CBS soap. First, Steffy (Jacqueline MacInnes Wood) will stay on her new independent path. She’ll assure Liam (Scott Clifton) that she’ll always love him, but she has to get on with her life.

Steffy will maintain that Hope (Annika Noelle) and Liam should be together. Naturally, Liam will be miffed about Steffy proposing to Hope for him. That should’ve been his choice, but Steffy won’t think she altered the course of history. She’ll just feel like she nudged Liam toward the inevitable outcome.

No matter what happens with Liam and Hope, Steffy’s removing herself from all that drama. What they do after this is out of her hands, but Steffy won’t mind if a “Lope” wedding happens. She’ll seem truly at peace, but Liam may worry that it’s all a charade. He’ll just want to be sure that Steffy knows what she’s doing.

Steffy will stand by her statements and dive right into work. When Steffy isn’t caring for Kelly, she intends to be busy around Forrester Creations. That bedroom line isn’t going to reboot itself! B&B spoilers say Steffy will put a rush on some new designs. Within a couple episodes, Steffy will be prepared to show off the staff’s accomplishments.

Meanwhile, Liam will focus on introspection. Since Steffy is no longer an option, Liam will consider his future with Hope. Is she the woman he wants to be married to? Liam will have to figure that out, so he may need some advice. It turns out Bill (Don Diamont) will offer some guidance during a tense discussion.

The Bold and the Beautiful spoilers say Liam will pay Bill a visit. He won’t want Bill to think he can worm his way back into Steffy’s life. Liam will snarl that Steffy’s off limits and add that Bill should find someone his own age. He’ll do everything he can to put an end to Bill’s “Still” dreams. However, Bill will point out that he’s living a nightmare instead.

After apologizing to Liam, Bill will beg for forgiveness. He might admit that he got caught up in a fight he couldn’t win. Now Liam hates his guts and neither one of them got Steffy. Bill will promise that he’s truly sorry. He’ll also encourage Liam to head down a better road than his father.

Bill might think Liam should take his chance with Hope while he can. The “Steam” family’s been blown apart, but the “Lope” fam still has a shot at happiness. Over with Emma (Nia Sioux), she’ll grill Zoe (Kiara Barnes) about her intentions. Emma will wonder if getting Xander (Adain Bradley) back is part of Zoe’s plan.

Despite her questions, Emma won’t really care about Zoe’s agenda. She’ll just want her enemy to drop it and leave Los Angeles behind. Zoe will promise Emma that she isn’t going anywhere. In fact, it appears she’ll make her move and kiss Xander this week. Even if it’s a fantasy, you can bet Zoe will try to turn it into a reality soon enough!