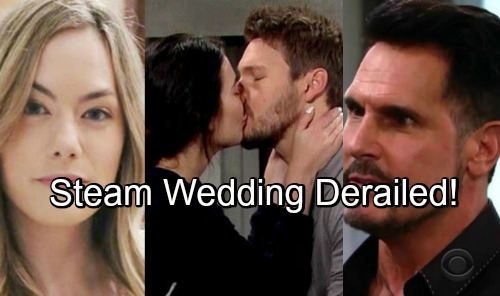 The Bold and the Beautiful (B&B) spoilers tease that Hope (Annika Noelle) will struggle to move forward. Liam’s (Scott Clifton) the love of her life and she really thought she was getting a future with him. It was crushing to have the rug pulled out from under her.

Steffy and Liam have another wedding coming up, so some drama could be brewing. B&B occasionally lets a couple have a peaceful ceremony, but not often. There’s usually a shocker or two to derail the festivities. Will that be the case this time around, too?

Even if the nuptials still happen in the end, The Bold and the Beautiful might as well cause some chaos for “Steam.” Of course, there’s a chance Hope will actually change the wedding’s outcome. She might inadvertently get some help from Bill (Don Diamont).

Let’s consider how this might play out. There’s no way Hope will be over Liam by the time he ties the knot again. If anything, Hope may pine harder. The closer the wedding date gets, the more she’ll want Liam back.

Meanwhile, The Bold and the Beautiful spoilers say Bill will blackmail Steffy. It looks like he’ll threaten to expose Taylor (Hunter King) as his shooter and hope that stops the nuptials. Will Steffy call his bluff or think about letting Taylor go down? She may be on the fence as she prepares for her big day.

What happens if Hope rushes in and stops the wedding? She might profess her love and argue that Liam’s marrying the wrong woman. At that point, Steffy may suddenly cave in due to Bill’s threat. She might see that her mistakes are always going to haunt her. Steffy may even wonder if Liam would be better off with Hope.

All this could make Steffy call off the nuptials for now. That doesn’t mean Liam would necessarily reunite with Hope, but it’d at least buy her more time. Will Hope ever win Liam over? We’ll give you updates as other B&B news comes in. Stay tuned to the CBS soap and don’t forget to check CDL often for the latest Bold and the Beautiful spoilers, updates, and news.