The Bold and the Beautiful Spoilers Next 2 Weeks: Bill Orders Justin to Dig Up Liam Dirt – Steffy Makes a Horrifying Discovery

BY Heather Hughes on July 14, 2018 | Comments: one comment
Related : Soap Opera, Spoiler, Television, The Bold and the Beautiful 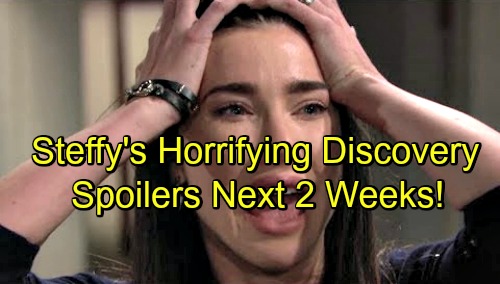 The Bold and the Beautiful (B&B) spoilers for the next two weeks tease that some big story shockers are looming. The week of July 16-20 will definitely bring some drama for Xander (Adain Bradley). First, he’ll have a run-in with Zoe (Kiara Barnes) and tell Emma (Nia Sioux) all about his obsessed ex. Since Xander won’t mention Zoe by name or offer a description, that’ll lead to a real mess later.

Emma will meet up with her new “friend” and start ranting about Xander’s stalker. The Bold and the Beautiful spoilers say Zoe will fume over all the trash-talking, but she’ll still want Xander back. Meanwhile, Xander will manage to put together a puzzle. The pieces will fall into place, so he’ll finally realize Zoe is the one Emma’s been hanging out with.

Naturally, Xander will be upset about Zoe barging in his life again. He’ll undoubtedly order her to stay away from Emma, but it looks like they’ll become fierce rivals instead. Across town, Brooke (Katherine Kelly Lang) and Liam (Scott Clifton) will debate his future. Since Liam can’t seem to make up his mind, Brooke will try to do it for him. She’ll insist that Hope’s (Annika Noelle) the only choice.

Of course, Liam also loves Steffy (Jacqueline MacInnes Wood) and doesn’t want to hurt her. He won’t be ready to give the ladies his decision just yet. Hope’s too busy to worry about romance right now anyway. She’s got a fashion show to plan! There’ll be time for love and war later, but some last-minute preparations need to be made first.

Emma and her dance team will be performing at the fashion show, so the guests will file in and buzz with anticipation. The Bold and the Beautiful spoilers say Justin (Aaron D. Spears) will be one of the attendees. He’ll beam with pride over his niece’s accomplishment, but a work emergency may soon arise. You never get a day off with you work for “Dollar Bill” Spencer (Don Diamont)!

B&B fans can expect Bill to make a phone call to his righthand man. He’ll order Justin to do something sneaky, but he’ll definitely face some backlash for it. Thanks to the news of Hope’s pregnancy, Bill now believes he has a shot with Steffy. He’ll push Justin to carry out a shady scheme, but Justin won’t think it’s a good idea.

Nevertheless, we all know Bill gets what he wants. If Justin refuses, he’ll just find someone else. That’s why torn Justin will probably cave in and do Bill’s dirty work as usual. It appears Justin will dig up some type of dirt on Liam. The week of July 23-27 will deliver the stunning aftermath. Steffy will fall right into Bill’s trap and make a horrifying discovery.

Elsewhere, Emma will be pretty down in the dumps. After Zoe crashes the fashion show and hogs the limelight, some insecurity will develop for Emma. She may wonder if Xander would be better off with Zoe, but that’s clearly not the case. Zoe’s nuts, so everyone should see that before long.