The Bold and the Beautiful Spoilers Next 2 Weeks: Ridge’s Shocking Choice Between Steffy and Hope FC Fashion Lines Revealed

BY Heather Hughes on September 3, 2018 | Comments: one comment
Related : Soap Opera, Spoiler, Television, The Bold and the Beautiful 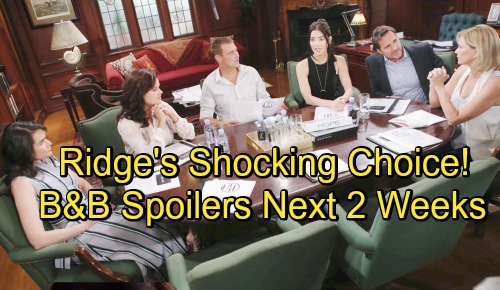 The Bold and the Beautiful (B&B) spoilers for the next two weeks tease that nerves will get the best of a few crucial characters. During the week of September 3-7, Katie (Heather Tom) will battle some concerns about Bill (Don Diamont). She’ll stand her ground on the custody issue, but she’ll realize this could bring major drama. When it comes to what he wants, Bill doesn’t mess around.

Thorne (Ingo Rademacher) will manage to ease Katie’s mind with some reassuring words. He’ll vow to be by her side through this war. In fact, Thorne intends on being in Katie’s life indefinitely. While Katie gets comfort, Hope (Annika Noelle) will need some as well. She’ll be a real mess thanks to some spotting and growing fears about the baby.

Liam (Scott Clifton) will rush over to see Hope soon enough. He’ll insist that everything’s going to be OK, but he may have some doubts deep down. Thankfully, their baby should survive this risky situation. The Bold and the Beautiful spoilers say they’ll face another crisis later. Hope will be the main one affected in the next round of mayhem.

Ridge (Thorsten Kaye) will have to choose between Steffy’s (Jacqueline MacInnes Wood) bedroom revival and the Hope for the Future line. Only one of them can remain at Forrester Creations, so this is sure to be a tough call. Brooke (Katherine Kelly Lang) will encourage Ridge to ditch the intimates collection, but he won’t be ready to commit to that. It’ll take some time for Ridge to reach a decision.

Elsewhere, The Bold and the Beautiful spoilers state that Steffy’s anger will rev up. She’ll lash out at Hope, who’ll be equally peeved and determined to fight. They’ll have a lot at stake, so B&B fans can expect some fierce moments. Hope and Steffy’s recent peace will certainly shatter!

The week of September 10-14 will bring Ridge’s long-awaited choice. After letting the rest of the staff weigh in, Ridge will reveal which part of the company he’s going to cut. Once he makes the announcement, chaos will be unleashed at FC. Ridge’s friends and family members will be at odds over the outcome of all this. You can bet either Steffy or Hope will respond with pure rage.

Ridge will face some backlash, but he’ll try to explain his position and do what’s right for the brand. Over with Bill, he’ll keep a big secret with Brooke. They’ll reach an understanding about the custody situation and put a major deal in play. Brooke will do her part to make sure Bill doesn’t get cut out of Will’s (Finnegan George) life, even if it means hurting Katie (Heather Tom) in the process.