BY Marcy Cohen on September 23, 2018 | Comments: one comment
Related : Soap Opera, Spoiler, Television, The Bold and the Beautiful 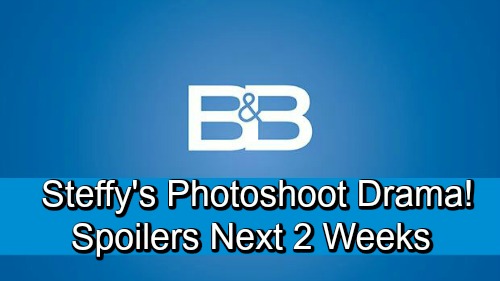 The Bold and the Beautiful (B&B) spoilers for the next two weeks tease that some big moments are in store. During the week of September 24-28, Katie (Heather Tom) and Thorne (Ingo Rademacher) will throw together a wedding ceremony. After sharing their plans with Will (Finnegan George), they’ll gather up a few friends and family members to watch them tie the knot.

While Thorne and Katie are busy saying their vows, Justin (Aaron D. Spears) will grow concerned about Bill’s (Don Diamont) state of mind. He’ll fear that Bill’s going to act out and do something crazy. Justin will warn that Bill can’t fly off the handle and destroy “Thatie’s” nuptials. It would only make matters worse in court.

It looks like Bill will agree with that, but he won’t give up. The Bold and the Beautiful spoilers say Bill will decide to call a stunning witness. He’ll make sure someone’s on hand who could sink Katie’s case. Of course, Ridge’s (Thorsten Kaye) attempt to sway the judge should cause problems. Brooke (Katherine Kelly Lang) will remain in the dark for now, but she’s sure to hit the roof later.

Over with Hope (Annika Noelle) and Steffy (Jacqueline MacInnes Wood), they’ll have a peaceful chat for once. Despite their many issues, they’ll agree on at least one thing. Maybe they’ll both think Will deserves to bond with his father. This could remind Steffy and Hope that their kids will connect them. Whether they like it or not, Liam (Scott Clifton) will forever be tied to both families.

Naturally, things could change if Hope has a miscarriage down the road. She’ll remain excited about the baby in the meantime, but Steffy may resume tormenting her soon. The week of October 1-5 will bring a ruling from Judge McMullen (Joe Lando). After considering both sides as well as Ridge’s request, the Judge will deliver a decision. Will this case work out in Katie’s favor or will Bill emerge victorious?

Since Brooke (Katherine Kelly Lang) and Bill are probably going to keep bonding, maybe B&B will let him lose the battle. That’d give Brooke a reason to comfort Bill along with a reason to blow up at Ridge. She certainly won’t approve when she learns Ridge tried to influence the judge.

Other Bold and the Beautiful spoilers say Xander (Adain Bradley) and Zoe (Kiara Barnes) will enjoy their first photoshoot together. Steffy and Sally (Courtney Hope) should be pleased by the sparks they see. Emma (Nia Sioux), on the other hand, will not! She’ll battle extreme jealousy as Zoe and Xander get cozy on camera.

It sounds like some serious confrontations are on the way. We’ll give you updates as other B&B news comes in. Stay tuned to the CBS soap and don’t forget to check CDL often for the latest Bold and the Beautiful spoilers, updates, and news.