The Bold and the Beautiful Spoilers Next 2 Weeks: Steffy’s Reign of Terror – Liam’s Last Apology – Emma Explodes at Thorne

BY Heather Hughes on July 30, 2018 | Comments: one comment
Related : Soap Opera, Spoiler, Television, The Bold and the Beautiful 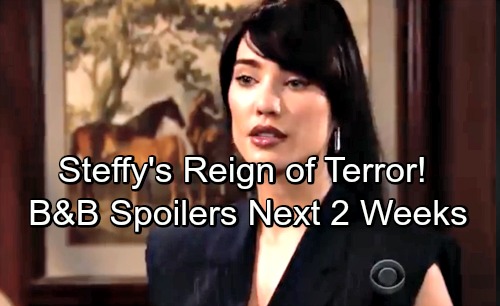 The Bold and the Beautiful (B&B) spoilers for the next two weeks tease that we’ll see loads of tension. The week of July 30-August 3 will bring serious conflict for Ridge (Thorsten Kaye) and Steffy (Jacqueline MacInnes Wood). He’ll try everything he can think of to stop Steffy’s marriage to Bill (Don Diamont), but she’ll insist this is for the best.

Steffy will contend that Liam (Scott Clifton) should’ve been able to control himself around Hope (Annika Noelle). It’s crystal clear to her that he can’t be faithful. Steffy will vow to stick with Bill, the guy who intends to cherish her. She’s throwing her notion of true love out the window and focusing on loyalty.

Later, Ridge will convince Liam that he has to go after Steffy. He’ll make him see the urgency of preventing this wedding. However, Liam can’t stop what’s in motion. The Bold and the Beautiful spoilers say Steffy will announce her decision to stick with Bill. In fact, she just might announce that they’ve already wed!

Bill will push for a rushed ceremony in the living room, so it’s possible Liam will arrive after the deed is done. Regardless, Steffy has no intention of changing her mind. At Forrester Creations, Steffy will reveal that other changes are in order. Hope and Liam will express confusion, but Steffy will set them straight soon after.

It appears Steffy’s shares will make her the company’s new owner, so she can do anything she wants. If Hope’s line survives Steffy’s reign of terror, she’ll surely face a demotion. Steffy will inevitably do everything she can to make Hope miserable. Liam certainly won’t be happy either!

The Bold and the Beautiful spoilers say Ridge will fume over the mess, but Brooke (Katherine Kelly Lang) will have high hopes for “Lope.” As long as Hope and Liam end up together, Brooke probably won’t care about the work drama. When Liam tries to speak with Steffy privately, Brooke will urge Hope to worm her way in the conversation. She won’t want Steffy and Liam to do any bonding.

Once Ridge finds out, he’ll hit the roof! Ridge definitely won’t appreciate Brooke’s “Steam” sabotage. B&B fans can expect the conflict to get even worse during the week of August 6-10. “Bridge” could start to crumble if they aren’t careful.

Back with Liam, he’ll apologize to Steffy one last time. After that, Liam will do some soul-searching and figure out what his future should really look like. Will that lead him to Hope? Over with Emma (Nia Sioux), she’ll be livid over Zoe’s (Kiara Barnes) new job. After she learns Thorne’s (Ingo Rademacher) responsible for hiring her, Emma will have a bit of a meltdown.