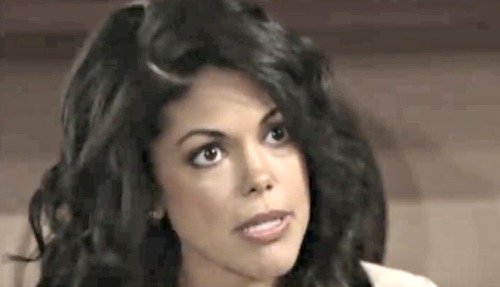 As The Bold and the Beautiful viewers know, Karla Mosley (who portrays Maya Forrester) is on maternity leave. Her last scenes were taped at the beginning of July and her baby is due this month. Sadly, Mosley announced via Instagram that her 5 year old niece has died.

Lilia Sophia was born September 1, 2012 and passed away August 3 2018. The little girl had many health struggles during her short life and underwent a heart transplant just over one year ago.

Due to the recent pregnancies of both Steffy (Jacqueline MacInnes Woods) and now Hope (Annika Noelle), Karla’ pregnancy was not written into the show. Instead well placed props have been used to hide her growing baby bump. This will be the first child for the 36-year old actress and her boyfriend, John Rogers.

Mosley joined the cast of B&B in 2013 as Maya Avant and quickly became involved in a controversial storyline. It was revealed that Maya Avant was born Myron Avant. Maya became the first transgender character on The Bold and the Beautiful

Maya went on to wed Rick Forrester (Jacob Young) to become one of the show’s power couples, but Jacob was released from contract earlier this year. Before being cast as Maya, Mosley was on the Guiding Light as Christina Boudreau.

Via Instagram, Mosley wrote, “And we have been forever changed for the better. Thank you. Lilia Sophia 9/1/2012-8/3/2018.” Fans can offer their condolences to Mosley on her Instagram. Thoughts and prayers go out to Karla Mosley and her family during this very difficult time.

Share your comments below and check back with CDL often for the latest The Bold and the Beautiful news, spoilers and updates. We look forward to seeing Karla Mosley back on the show as Maya Avant as soon as she is ready.