BY Kinsley Goldman on March 28, 2018 | Comments: one comment
Related : Soap Opera, Spoiler, Television, The Bold and the Beautiful 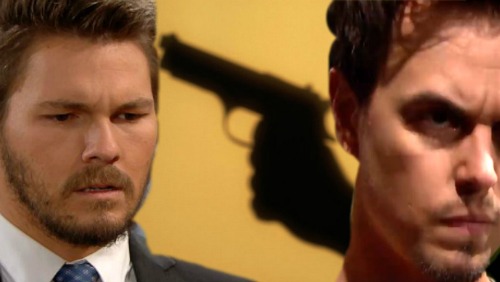 The Bold and the Beautiful (B&B) spoilers tease that Liam (Scott Clifton) will struggle to grasp the whole picture. He remembers a few key pieces of the puzzle now, but Liam doesn’t recall everything that happened the night of Bill’s (Don Diamont) shooting. Unfortunately, Liam recalls enough to worry that he might be guilty! He’ll continue to fret over this possibility over the next few episodes.

However, B&B buzz says this may be the first of several stunning twists. Liam recalls watching Bill pop the question to Steffy (Jacqueline MacInnes Wood). He also remembers being at Bill’s house that night and seemingly firing a shot toward his back. It seems a little early to reveal the true shooter, so there may be more to the story.

Liam’s brain can exactly be trusted right now. The proposal popped in his head after he hit his head outside the cliff house, so that part may be legit. The rest of Liam’s memories came when Bill described the events before the shooting. How do we know what’s real and what Liam’s paranoid mind is creating? In fact, it could be an interesting mixture of the two.

Let’s say Liam really was at Bill’s place that night. That seems logical if he had just witnessed the proposal. Liam was undoubtedly fuming and ready for a fierce confrontation. This explains why he recalls seeing Bill through the window and the wind rustling in the trees.

After Liam entered, that’s when things could get hazy. Did Liam truly fire the gun or could he have been right behind the shooter instead? His mind could be warping the truth. It’d be smart for B&B to drag the storyline out and make the shooter someone else entirely. The Bold and the Beautiful fans are always anxious for more shockers.

What if Liam saw someone else do the deed and the trauma of it all caused his memory gaps? Wyatt (Darin Brooks) would be a great person to bring into this. Liam might’ve walked away satisfied after watching his brother fire the shot. He may have even assured Wyatt that he’d keep the secret.

B&B fans will recall that Wyatt was drunk and furious that night. He passed out later, so he’s obviously got some memory gaps, too. Why not let Wyatt and Liam share this story? Bill was about to sign the papers to cut the brothers out of Spencer Publications. It makes sense to use them both here. Liam could eventually remember what went down and confront Wyatt.