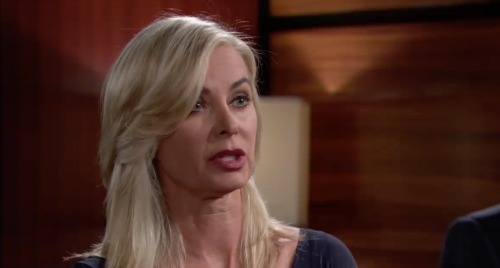 The Young and the Restless (Y&R) spoilers reported the entire sordid storyline that involved Jack’s (Peter Bergman) seeming paternity shocker. But low and behold he’s been revealed as an Abbott after all. How did that happen? Well, Y&R simply debased a legacy character who’s name is Ashley Abbott (played by the great Eileen Davidson).

While Mishael Morgan (Hilary) is known to have approved of the Hilary Dies storyline that killed her character off, Davidson does not appear to be on board with the manner in which executive producer and head writer Mal Young is writing out Ashley. Young has stated that Ashley will be seen again in the future, implying that an agreement with the actress exists, but Davidson came out and clearly denied the veracity of Young’s statement.

To think that Ashley, of all people, would be so vengeful that she would take advantage of Dina’s (Marla Adams) condition is just not right. Hardcore viewers can not be satisfied with the outcome of this extremely long arc that leaves them not just believing, but knowing that they were purposely thrown a red herring.

Spending time with a soap opera can be a one-hour process each day, if a viewer watches the show live with included commercials. Technology that’s existed for decades, starting with video tape recorders and, more recently, the digital video recorder, or streaming services that enable video advancement, enables an approximately forty to forty-five skim of all scenes, with commercial skips.

Whenever and however Y&R fans tune in, they want to see worthwhile entertainment. How can any of TPTB claim that the past month’s work within this storyline has held complete value?

Yes, Adams’ turns were and remain terrific. And, the script references to many classic show characters, as Jack was pursuing the mystery, were good. But the counterbalance to those upsides was fierce.

Jack could have, at any time, had his DNA tested against some invented remnant of John’s (Jerry Douglas). To try and claim that nothing of that sort exists would be a misdirection because the topic was never included in any dialogue. The omission of this common sense speculative thought was a strong clue that the entire storyline was a ruse from the jump. To compound this point by making Ashley into some type of one-dimensional, petty goof does is also unacceptable.

Y&R could have not made Ashley into the villain in this instance. It not only did that, but will actually write Davidson out of the show on an indefinite flat note. This always-effective actor, who’s cast tenure dates back decades, does not deserve that. Neither do her fans.