BY Marcy Cohen on May 17, 2018 | Comments: one comment
Related : Soap Opera, Spoiler, Television, The Young and the Restless 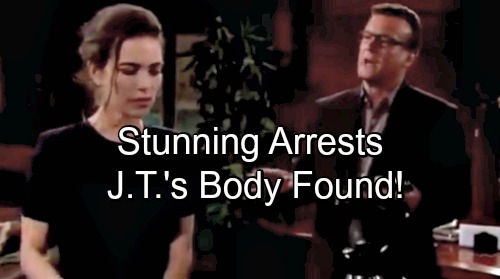 The Young and the Restless (Y&R) spoilers tease that Genoa City will be buzzing with activity. As kids get out of school and the weather warms up, families will be ready to get outside. Naturally, that means Chancellor Park will be a real hotspot. People will gather to picnic, play and enjoy the beautiful garden.

The idea of parents and children having fun would be sweet to most. However, it could bring some scary moments for four nervous ladies. J.T.’s (Thad Luckinbill) body is buried in that park, so more visitors will add to the cover-up crew’s anxiety. Nick (Joshua Morrow) is quite involved in making things better for the community. Any garden additions could disturb ground and lead to a shocking discovery.

The Young and the Restless spoilers say Lauren Woodland will be back as Brittany in June. She’ll be serving as someone’s lawyer on a high-profile case. Kelly Kruger will also reprise the role of Mac next month, so she’ll clearly be around because of J.T. news.

Those returns mean Y&R will have to get the ball rolling. June is almost upon us, so the corpse shocker should come soon. Of course, Victoria (Amelia Heinle) is going to face plenty of questions from Paul (Doug Davidson). In Thursday’s episode, May 17, Victoria claims she gave J.T. cash to disappear on the night of the party. Paul will naturally wonder how that can be true if J.T.’s dead.

The Young and the Restless spoilers suggest that some stunning arrests are coming up. Paul may focus on Victoria as his prime suspect and ultimately take her into custody. Nikki (Melody Thomas Scott) won’t stand for that, so the cover-up gang’s pact will start to crumble. There’s a good chance they’ll all face serious consequences.

Nikki, Victoria, Sharon (Sharon Case) and Phyllis (Gina Tognoni) have some bombshells in their future. Are you ready for the truth to exposed? Can Brittany and Michael (Christian LeBlanc) get these terrified liars off the hook? We’ll give you updates as other Y&R details emerge. Stick with the CBS soap and don’t forget to check CDL often for the latest Young and the Restless spoilers, updates, and news.