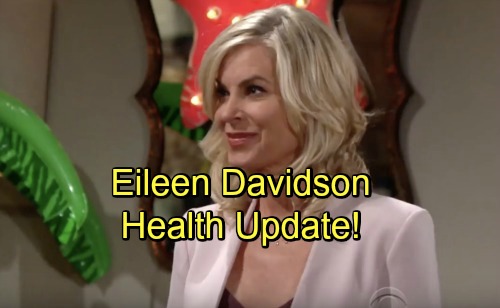 The Young and the Restless (Y&R) spoilers has a health update to report about a popular Y&R star. Eileen Davidson, who portrays Ashley Abbott on the CBS soap, shared a new update on her Instagram account about a spider bite she recently suffered. Eileen has been keeping fans up to date on the status of her bite, which she suffered last week.

In her new post, Eileen shared a photo of herself featuring her upper arm where she suffered the bite. You can clearly see a large red area on her arm surrounding the bite. Her message reads: “Spider bite infection has not grown in 5 days so I’m hoping for the best! Still there though.”

In previous messages, Eileen indicated that she encountered the spider in her bed, and that her bite had become infected. She also stated that she had sought medical treatment for the bite, and that she was on antibiotics, topical ointments, and had received a tetanus shot.

Her previous messages also stirred up some controversy about what kind of spider had bitten her. In her initial message, she indicated that the culprit was a Brown Recluse spider, but in a later post she clarified that it probably wasn’t a Brown Recluse.

As was true of her previous messages about the bite, Eileen has received many well-wishes in response to her post. Many of her fans are offering advice for treatments and sharing stories of their own experiences with spider bites and the aftermath.

It’s good to see that Eileen’s infection isn’t getting worse! Our well-wishes are with Eileen as she continues to recover. Stay tuned to the CBS soap and don’t forget to check CDL often for the latest Young and the Restless spoilers, updates, and news.

Spider bite infection has not grown in 5 days so I’m hoping for the best! Still there though. 😩

A post shared by Eileen Davidson (@eileendavidsonofficial) on Oct 5, 2018 at 5:16pm PDT