The Young and the Restless Spoilers for Next 2 Weeks: Ashley Returns To Newman Only If Victoria’s Fired – Nikki’s Affair Exposed

BY Heather Hughes on March 10, 2018 | Comments: one comment
Related : Soap Opera, Spoiler, Television, The Young and the Restless 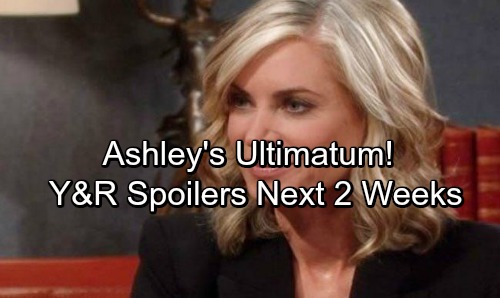 The Young and the Restless (Y&R) spoilers for the next two weeks tease that some bombshells are on the way. The week of March 12-16 will bring a big one for Victoria (Amelia Heinle). She’ll find out Abby (Melissa Ordway) gave Victor (Eric Braeden) evidence against her. Victoria will realize the jig is up, so she’ll confess to working with Jack (Peter Bergman).

Victor will express disappointment in his daughter and leave her to squirm. Ashley (Eileen Davidson) got fired over this, so Victoria will fear the same fate. Her concerns could intensify thanks to Ashley’s demands. The Young and the Restless spoilers say Ashley will agree to return to Newman, but there’ll be one major condition. Ashley will want Victoria tossed out of the company right away.

While Victor mulls that over, Devon (Bryton James) will promise to be Hilary’s (Mishael Morgan) “baby daddy.” Naturally, Lily (Christel Khalil) will fume over their parenthood pact. Y&R fans can expect Lily to use some desperate tricks. She’ll do everything she can to stop Hilary and Devon’s mission from moving forward.

Elsewhere, Sharon (Sharon Case) will rely on Nick (Joshua Morrow). She’ll need some advice, so these two will continue to bond. Over with Nikki (Melody Thomas Scott), she’ll be in a tight spot. It looks like her hot hookups with Arturo (Jason Canela) will be exposed. Nick may be the one to put it all together, so he’ll most likely raise an eyebrow at his mom’s decisions.

Other Young and the Restless spoilers say J.T. (Thad Luckinbell) and Victor will spar. They’ll argue about Victoria’s future and play the blame game. The drama will heat up during the week of March 19-23, so Victor will be forced to take action. Will he have to intervene when J.T. explodes at Victoria? If J.T. goes too far, you can bet that he’ll face Victor’s wrath.

Across town, Abby (Melissa Ordway) will tackle an exciting challenge. There’s a good chance this will involve her work at Newman. Perhaps Abby will get a promotion for all that great work she did. She helped Victor see the truth, so that should earn her some points.

The Young and the Restless spoilers say Ashley will face a different task. She’ll make a surprising move and Jack (Peter Bergman) will be the one who’s caught off guard. Could Ashley decide to make a comeback at Jabot? If her anger dies down enough, she might have a change of heart.

Finally, Nick (Joshua Morrow) will deal with some stunning news. Will he learn Victor already knows about Christian’s (Jude and Ozzy McGuigen) paternity? Could this be about Chelsea (Melissa Claire Egan) or perhaps something Phyllis (Gina Tognoni) cooked up? Regardless, Nick’s jaw is sure to drop.

It sounds like some interesting scenes are looming. We’ll give you updates as other Y&R details emerge. Stick with the CBS soap and don’t forget to check CDL often for the latest Young and the Restless spoilers, updates and news.