The Young and the Restless Spoilers: Friday, May 18 Update – Help Arrives For Desperate Jack – Sharon and Nick’s Jealous Frenzy

BY Heather Hughes on May 17, 2018 | Comments: 2 comments
Related : Soap Opera, Spoiler, Television, The Young and the Restless 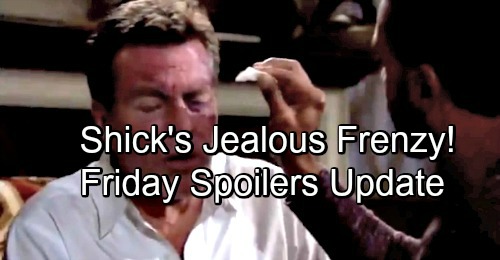 The Young and the Restless (Y&R) spoilers for Friday, May 18, tease that Sharon (Sharon Case) and Nick (Joshua Morrow) will enjoy their casual arrangement. However, big changes are brewing soon enough. After more sex at home, Nick and Sharon will rush to get ready for the New Hope dinner. They’ll reflect on some high school memories and agree to rein in the chemistry once they’re in public.

At Hamilton-Winters, Hilary (Mishael Morgan) will mention the nursery design to Devon (Bryton James). He’ll flash a smile and admit he’s glad to be making baby plans. Devon will suggest that he can’t wait to be a dad. Hilary won’t think they should get ahead of themselves, but Devon will believe they got the job done. He’ll finish off the conversation by inviting Hilary to the New Hope event.

At the athletic club, Nikki will meet with Sharon and Phyllis. They’ll bicker about the cell phone situation as well as Victoria’s decision to run her mouth. The gang will ultimately just focus on being more careful in the future. They all need to get a grip if they want to keep their freedom.

Other Young and the Restless spoilers say the New Hope dinner will bring jealousy for Nick and Sharon. Nikki will encourage Nick to charm Jane (Laura James), a business associate who might make a donation. Phyllis will also push Sharon to chat with Lawrence (Zach Dulin), another potential donor.

Naturally, all the flirty moments will bring dirty looks on both sides. Sharon and Nick just won’t be able to handle it! They’ll cut the dinner short and return home to reevaluate their agreement. Y&R spoilers say they’ll decide they have to be all in. Nick and Sharon will seal their official reunion with a kiss.

Back at the gathering, Phyllis and Billy will disturb a warm “Hevon” moment. Despite the unfortunate interruption, Devon and Hilary will still end the night on a high note. At the Abbott cabin, Jack will gaze at his liquor and painkillers. He’ll summon Neil (Kristoff St. John) to help him fight this battle.

The Young and the Restless spoilers say Neil will rush over to provide support. He’ll hear about the car crash and let Jack unload how he’s feeling. When it’s time for advice, Neil will suggest that DNA doesn’t really matter here. Jack’s still the same man he’s always been and nothing can change the role John (Jerry Douglas) played in his life.

Neil will even threaten to derail his own sobriety if Jack heads down this path. Jack will take a stand against that, but Neil will still want Jack to reconsider. He’ll contend that Jack has to change his way of thinking, so let’s hope Jack listens.

Y&R fans won’t want to miss the great scenes ahead. We’ll give you updates as other news comes in. Stay tuned to the CBS soap and don’t forget to check CDL often for the latest Young and the Restless spoilers, updates, and news.