The Young and the Restless Spoilers: Mariah Unleashes Her Wrath on Sharon – Tessa’s Torment Leads To Unexpected Result

BY Heather Hughes on December 9, 2018 | Comments: one comment
Related : Soap Opera, Spoiler, Television, The Young and the Restless 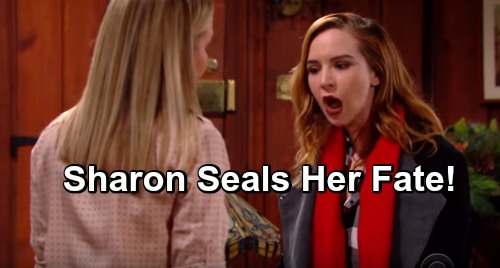 The Young and the Restless (Y&R) spoilers tease that Mariah (Camryn Grimes) will get a wakeup call. She’s about to realize just what saintly Sharon (Sharon Case) is capable of! Ever since Tessa (Cait Fairbanks) admitted to blackmailing Nikki (Melody Thomas Scott) and the others, Mariah’s been giving her the cold shoulder. She can’t believe that Tessa would torment her own mother like that.

Of course, the cover-up crew wasn’t really all that shaken up about the letters. As Tessa pointed out, Nikki sent her a dollar just to screw with her. How tormented could they have been if they were willing to call the blackmailer’s bluff? The gang got a tad more fearful after Tessa sent the picture of the sculpture, but they still held off on the payment.

After Mariah was followed and harassed with calls from a blocked number, that was the last straw for Sharon. As Y&R fans know, that wasn’t the blackmailer at all. Tessa was facing an actual threat that Mariah and Sharon are conveniently forgetting. Sharon was terrified enough to push Nikki to make the payment, so who can fault Tessa for being terrified enough to demand it?

Besides, Tessa had no intention of turning anybody over to the cops whether she got the money or not. She just was just hoping to protect Mariah and Crystal (Morgan Obenreder) from a violent attack like the one she’d already endured. Mariah’s been acting like Sharon is the only victim, but Tessa is clearly one, too.

Victoria terrorized Tessa in her own home and now she’s back for another round of drama. Nikki and Victoria will be the ringleaders of this kidnapping plot, but Sharon will still be a participant. The same Sharon who gasped over Tessa’s bruises at the coffeehouse. The same Sharon who begged Tessa to check herself into the hospital over internal injury concerns!

Mariah was in tears because Tessa was willing to “scare the hell” out of Sharon, but two can play at that game. Tessa will be a mess after everything she’s gone through with these vicious smugglers. She’ll think they’re out to get her again until Sharon and the others reveal themselves.

Fortunately, Mariah will see the error of her ways. She’s been putting Sharon on a pedestal, but her mom’s about to get knocked right off it. The Young and the Restless spoilers say Mariah’s search for Tessa will lead her to the woods. That’s where the deadly posse will toss hysterical Tessa out like garbage.

Once Tessa admits Victoria and Nikki are responsible, Mariah’s fury will erupt. Later, she’ll realize Sharon had to be part of this, too. That’ll take Mariah’s anger to a whole new level. Tessa’s made some mistakes, but enough is enough. Mariah will finally take a stand against all these horrible scare tactics.

Tessa betrayed Mariah’s trust, but Mariah also betrayed Tessa’s by lying about her scheme with the cover-up club. Plus, the other ladies have betrayed Mariah’s trust not once, but twice. Victoria went rogue by confronting Tessa without Mariah’s knowledge and now the gang’s back at it with this kidnapping fiasco. Honestly, no one can be trusted in Genoa City.

During the week of December 10-14, The Young and the Restless spoilers say Mariah will face off with Sharon. She’ll be furious that Sharon would go behind her back and try to intimidate Tessa like that. If Tessa’s going to get chewed out for tormenting, Sharon deserves the same treatment.

To be fair, Sharon will be the most sympathetic of the bunch in Monday’s scenes. She’ll scold the others for doing something despicable, but words mean nothing without action. Mariah will be appalled with Sharon for refusing to shut this down.

The Young and the Restless spoilers say Sharon could regret playing a role in this nightmare. She’d rather see Mariah walk away from Tessa, but she’ll drive her right back into her arms instead! We’ll give you updates as other Y&R news comes in. Stay tuned to the CBS soap and don’t forget to check CDL often for the latest Young and the Restless spoilers, updates and news.