BY Heather Hughes on December 8, 2018 | Comments: one comment
Related : Soap Opera, Spoiler, Television, The Young and the Restless 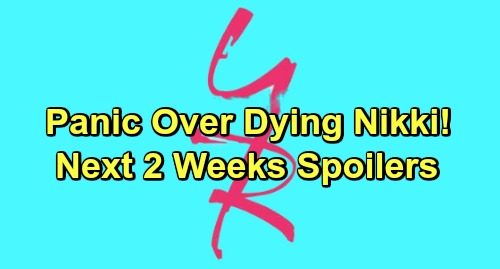 The Young and the Restless (Y&R) spoilers for the next two weeks tease that some explosive conflict’s on the way. During the week of December 10-14, the cover-up crew will interrogate Tessa (Cait Fairbanks) to the point of a breakdown. She’ll call Mariah (Camryn Grimes) from the freezing woods and sob out enough details to get her over there.

After Mariah learns about the kidnapping plot and calls off the breakup, she’ll confront Sharon (Sharon Case) about her part in the chaos. Mariah will insist that Sharon crossed the line, but Sharon will argue that they had to be sure Tessa was innocent. She’ll even admit she wants Tessa out of Mariah’s life, so all that “I’ll support whatever you decide” talk was a load of lies.

While that battle heats up, another one will wind down. Cane (Daniel Goddard) will push for peace with Devon (Bryton James), so they’ll manage to put their issues to rest. Devon will realize Cane’s just been trying to help, so they’ll reach an understanding and vow to stick together.

Over with Victoria (Amelia Heinle), her life will be turned upside down by Reed’s (Tristan Lake Leabu) search for J.T. (Thad Luckinbill) answers. On the bright side, Reed’s drama could bring Victoria and Billy (Jason Thompson) closer. She’ll appreciate having someone she can rely on as the pressure revs up.

Other Young and the Restless spoilers say Nikki (Melody Thomas Scott) will be pushed to the edge. She’ll find J.T.’s burial clothes in her bed, so that’ll leave her in desperate need of a drink. One glass will turn into another and soon Nikki will have a drunken scare. She’ll stumble into the path of an oncoming car, so it looks like a terrible accident is looming.

During the week of December 17-21, someone will linger between life and death. Since we know Nikki ends up in the hospital soon, it sounds like that’ll be Nikki who’s barely hanging on. Nick (Joshua Morrow) will get some news that leaves him devastated, so that may be a phone call about his mother’s life-threatening injuries.

Elsewhere, Kerry (Alice Hunter) will get to know Jack (Peter Bergman) a bit better. He’ll continue to express interest in her, so she’ll need to learn more if they want this to work. Y&R spoilers say Kerry will discover something she didn’t expect, but is that a good thing or a bad thing? In the end, honesty is the best policy. Even if it involves something negative, this could help Jack and Kerry bond.

Unfortunately, Ana (Loren Lott) won’t have that honest mindset. She’ll choose to keep a secret from Devon (Bryton James), so it could be something she fears will hurt him or cause a setback in some way. Then again, Ana might be hiding something in her past. There’s a chance that Ana is the same musician ex that Fen’s (Zach Tinker) been talking about.