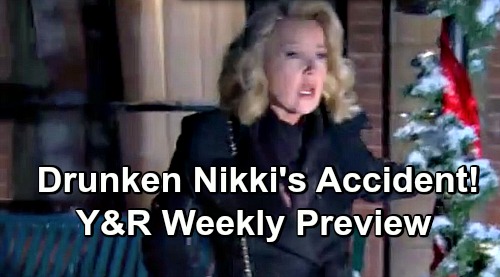 The Young and the Restless (Y&R) spoilers preview for the week of December 10-14 tease that tension will explode for many Genoa City residents. First, let’s talk about Reed’s (Tristan Lake Leabu) vengeful plans. He’ll come home on a holiday break, but the real reason for his return will be J.T. (Thad Luckinbill). Reed will assure Victoria (Amelia Heinle) that he’s going to find out how his father died.

Y&R fans can expect Reed to lash out over the mystery surrounding J.T.’s demise. He’ll be hopeful when he learns J.T.’s body is missing, but Victoria will try to tame that a bit. She won’t want to see her son crushed all over again.

At the same time, Victoria won’t want Reed storming around town looking for vengeance. She’ll believe she’s helped him find a positive middle ground, but she’ll be proven wrong. The Young and the Restless spoilers say Reed will seethe once more when he talks to Billy (Jason Thompson).

As a result, Victoria’s ex will track her down to offer a warning. Billy will insist that Victoria might have a problem on her hands. He’ll feel like Reed could be headed down a dark road. Speaking of dark roads, Nikki (Melody Thomas Scott) will end up on one herself. She’ll start sneaking drinks on this week’s new Y&R episodes and it’ll lead to major trouble.

Nikki will get grilled by Rey (Jordi Vilasuso) at the police station, but she’ll refuse to talk without her attorney present. The stress of it all could certainly rev up her desire to guzzle. Later, The Young and the Restless spoilers say Nikki will stumble in the snow and find herself in front of approaching headlights. She’ll be right in a speeding car’s path, so things aren’t looking good!

Elsewhere, Mariah (Camryn Grimes) will switch sides and go off on her mother. Sharon (Sharon Case) will face Mariah’s fury for participating in Tessa’s (Cait Fairbanks) traumatic kidnapping. The whole ordeal will leave Tessa shaken, but a “Teriah” reunion will come out of it.

Victoria (Amelia Heinle) and Nikki (Melody Thomas Scott) will admittedly be much harsher with Tessa, but Sharon didn’t have to go along with it. She won’t get a pass for her involvement in this mess. Despite Tessa’s attempt to keep Sharon’s name out of it, Mariah will figure out her mom was indeed a kidnapper. She’ll corner Sharon at the cottage and insist that a line was crossed.

Mariah will order Sharon to leave Tessa alone and tell her posse to do the same. Unfortunately, Sharon will refuse to do that. She’ll argue that she won’t stop until Tessa’s out of Mariah’s life for good. It sounds like a mother-daughter war is breaking out!