The Young and the Restless Spoilers: Melissa Claire Egan Weighs In On Y&R Shakeups – Chelsea’s Return to Genoa City Expected? 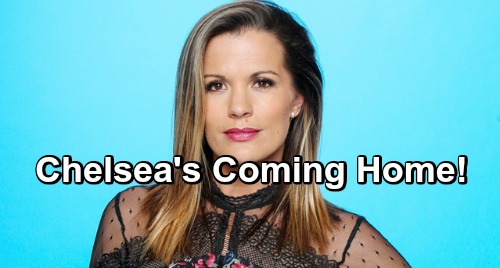 The Young and the Restless (Y&R) spoilers reveal that Mal Young’s departure still has the soap world buzzing. Y&R’s head writer and executive producer is out at the CBS soap, so that’s paving the way for major changes. Tony Morina will be filling that executive producer spot while Josh Griffith takes over head writing duties.

Now that everything’s squared away, some Y&R stars are speaking out on the switch. One of those stars is Melissa Claire Egan (ex-Chelsea). She’s a Young and the Restless alum right now, but could her return be in the works eventually? Based on her reaction to Young being swapped out, there could be hope for Chelsea’s future in Genoa City.

After Daytime Confidential tweeted about Morina and Griffith’s new roles at Y&R, Egan decided to chime in. She replied to the tweet with three handclap emojis, so she clearly supports having this duo in power. Perhaps that has something to do with the material Egan was given before she left the show. 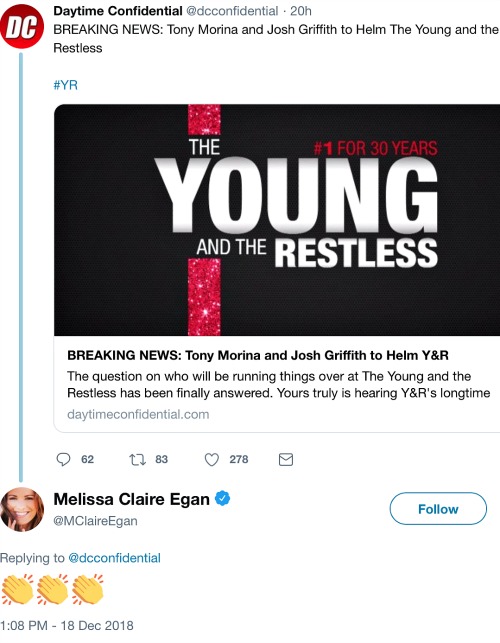 You’re hard-pressed find a Chelsea fan out there who actually liked her exit storyline. It didn’t make sense for Chelsea to suddenly revert to her con artist roots, especially if she was going to be so sloppy about it. Will Morina greenlight Chelsea’s return at some point? Griffith could undoubtedly write a great story to undo the damage.

Of course, Adam Newman would likely hit town again as well. If they’re going to bring back Chelsea, they should really bring back Adam, too. Whether Michael Muhney reprises the role or a recast steps in, it makes sense to reunite this Y&R supercouple. Adam and Chelsea bring a lot to the table.

It’s worth mentioning that Egan exited The Young and the Restless earlier this year and it’s still the last project listed on her IMDB page. That could mean Egan has struggled to find the gigs she wanted elsewhere. Maybe she’d be eager to sign on the dotted line at Y&R again and let Chelsea come home to Genoa City.

Would you like to see Melissa Claire Egan back as Chelsea? The Young and the Restless spoilers say some interesting shifts will be happening behind the scenes in the coming months, so stay tuned. We’ll give you updates as other Y&R news emerges. Stick with the CBS soap and don’t forget to check CDL often for the latest Young and the Restless spoilers, updates and news.