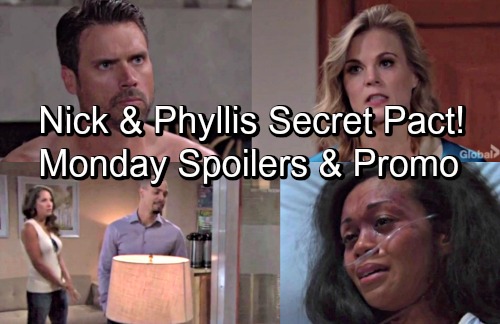 The Young and the Restless (Y&R) spoilers for Monday, July 23, tease that Phyllis (Gina Tognoni) and Nick (Joshua Morrow) will face horrifying regrets. After an evening of drinking and bonding, they share a hot sex session on Friday. They’ll move their steaminess from the kitchen to the bedroom later.

By the time Monday rolls around, “Phick” will be in bed wondering where it all went wrong. They’ll feel terrible about making such an impulsive, stupid decision. Phyllis and Nick are having problems in their relationships, but that doesn’t mean they want to destroy them. They’ll fear that could happen if the truth gets out.

As a result, The Young and the Restless spoilers say they’ll swear each other to secrecy. Phyllis will suggest they should never speak of this again and that’ll be fine by Nick. Unfortunately, somebody will make it impossible to forget this mistake.

Another Y&R character will uncover their tryst, so this bomb’s bound to drop. Whether it’s Summer (Hunter King) or some other snooper, word could spread to the wrong people soon. Sharon (Sharon Case) and Billy (Jason Thompson) should have a whole lot of heartbreak headed their way.

Meanwhile, Kyle (Michael Mealor) will gain an advantage at Jabot. He becomes Ashley’s (Eileen Davidson) ally on Friday, so Kyle will have someone powerful in his corner. Of course, Kyle can be pretty powerful himself! He’s the kind of guy who takes matters into his own hands and controls his own destiny.

The Young and the Restless fans will see Kyle do something bold on Monday. He’ll get the upper hand, so that could help him inch closer to the top. It sounds like Ashley may want to watch her back! Kyle just might double-cross her if she’s not careful. For now, they’ll work together to expose Billy’s deception and earn a little more Jabot influence.

At the hospital, Devon (Bryton James) will face a difficult waiting game. He’s not listed in Monday’s spoilers just yet, but this is Y&R’s hottest story. Let’s hope they’ll keep the momentum going with some “Hevon” scenes on Monday’s new Y&R episode, July 23. Regardless, this storyline will definitely pick up on Tuesday.

Devon will hold out hope for Hilary’s (Mishael Morgan) recovery, but complications are looming. It won’t probably be long until they have to say goodbye, so expect a quickie wedding later this week. That should serve as a tragic farewell. We’ll give you updates as other Y&R news comes in. Stick with the CBS soap and don’t forget to check CDL often for the latest Young and the Restless spoilers, updates, and news.