The Young and the Restless Spoilers: Monday, November 5 – Billy and Sharon Lean on Each Other – Phyllis and Nick’s Passion Takes Over 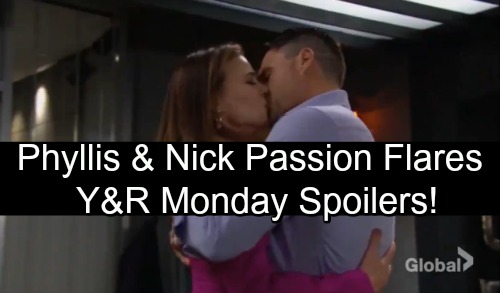 The Young and the Restless (Y&R) spoilers for Monday, November 5, tease that Billy (Jason Thompson) will deal with more drama. He’s still angry with Phyllis (Gina Tognoni), but that doesn’t mean he’s content without her. Billy must be longing for what they shared before it all fell apart.

Sometimes you can miss something without actually wanting it back, so that’s probably how Billy feels right now. Of course, Phyllis’ new job will keep Billy’s agitation alive. Y&R fans know Phyllis tends to be bossy anyway, so she may be a nightmare now that she’s in power. As Phyllis gives out orders and fulfills her vision for the company, Billy won’t be happy about it.

Meanwhile, Sharon (Sharon Case) will be in the same boat. During her Halloween fight with Nick (Joshua Morrow), Sharon suggested she just wanted a good life with an honest man. She’s upset about the hookup with Phyllis, but this is bigger than that. Nick just isn’t the same guy anymore, so Sharon’s done trying to make it work.

Sharon wishes Nick could’ve been the person she needed him to be, so she’s hurting like Billy. They’ll come together to commiserate in Monday’s new Y&R episode, November 5. Billy may thank Sharon again for helping him see the light. She blew the betrayal news up at the wedding, so Billy was able to find out the truth.

Both Sharon and Billy will agree that it’s best to move on. They’ll hope to head down new paths, but Nick and Phyllis head down a familiar one. The Young and the Restless spoilers say Phyllis will stop by Dark Horse with dinner. She’ll need someone to talk to and Nick will be her only real option. They’ll vent about their romantic problems before things take a hot turn.

The Young and the Restless spoilers say the former flames will start making out. It’ll escalate into hooking up again, so they’ll decide to make this the norm. Nick and Phyllis aren’t ready to pursue new love, but they could sure use sex buddies to ease their stress. They’ll reach an understanding and roll with it for as long as they feel like it.

It sounds like Monday’s episode will bring some sexy moments. We’ll give you updates as other Y&R details emerge. Stay tuned to the CBS soap and don’t forget to check CDL often for the latest Young and the Restless spoilers, updates, and news.