The Young and the Restless Spoilers Next 2 Weeks: Nikki Faces a Revenge Plot – Jack’s Startling Discovery – Ashley’s in Hot Water 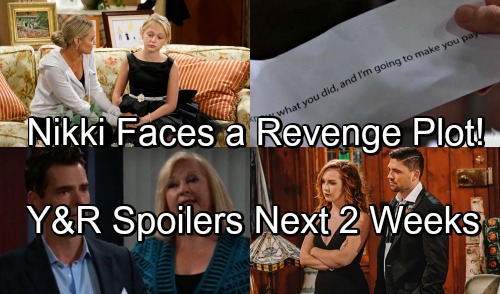 The Young and the Restless (Y&R) spoilers for the next two weeks tease that lives will be shattered and families will be ripped apart. The week of October 1-5 will bring some tough moments for Billy (Jason Thompson). He’ll feel betrayed when Ashley (Eileen Davidson) and Kyle (Michael Mealor) call him out for his embezzlement. Traci (Beth Maitland) will add to the pain when she takes over the CEO spot.

Of course, Billy only has himself to blame. He may realize that at some point during this madness. The Young and the Restless spoilers say Phyllis (Gina Tognoni) will do her best to help Billy cope. She won’t want him to think he’s down for good. With rehab and some fierce determination, maybe Billy can put his life back together.

Elsewhere, Mariah (Camryn Grimes) will reach a difficult conclusion. After agonizing over the one-night stand secret, Mariah will decide to come clean. Despite the terrible fallout, this is something Sharon (Sharon Case) needs to know. Mariah isn’t keen on lying or letting someone be lied to, so she’ll tell Sharon that Nick (Joshua Morrow) and Phyllis had sex.

At the wedding, Nick will freak when Sharon’s nowhere to be found. He’ll reach out by phone, but Sharon won’t pick up. Mariah will be visibly nervous, but she’ll argue that everything’s fine. However, Nick will feel like there’s something Mariah’s leaving out. He’ll demand to know where Sharon is, so Mariah may confess to blabbing.

It looks like the nuptials will turn into a nightmare, so Sharon and Nick will have to deal with some family drama. Faith (Alyvia Alyn Lind) will be crushed when things once again crumble between her parents. Noah (Robert Adamson) will make a surprise trip back to Genoa City as well, but he may wish he’d stayed in Mumbai!

Other Young and the Restless spoilers say Rey (Jordi Vilasuso) will take a big step. He’ll determine that he’d like to stay in GC for a while, so he may make his job more permanent. We’ll also see some cover-up crew chaos this week. It appears one of the girls’ night gang will get a threatening message. Someone knows what they did and intends to bring them down for it.

Victoria (Amelia Heinle), Nikki (Melody Thomas Scott), Phyllis and Sharon will all have a crisis on their hands. They’ll face another round of mayhem during the week of October 8-12. Y&R spoilers state that Nikki will be targeted. She’ll realize someone wants revenge, so it’s possible J.T. (Thad Luckinbill) comeback fears will resurface. Nevertheless, there may be somebody else with a shocking grudge.

Over with Ashley (Eileen Davidson), she’ll find herself in hot water. Jack (Peter Bergman) will also make a startling discovery, so these Young and the Restless spoilers might collide. Could Jack learn Ashley is behind some rigged paternity tests? He could at least figure out that something’s off. If Jack realizes he’s an Abbott after all, he could start digging and potentially find clues that lead to Ashley.

Finally, the pressure will become too much for Lily (Christel Khalil). She’ll have a bit of a breakdown in prison, so she’ll need more support. Will Lily he harmed in some way or will this simply be emotional distress? The Young and the Restless fans will be curious to see how it all plays out.

Don’t miss the next two weeks of bombshells and destruction! We’ll give you updates as other Y&R news comes in. Stick with the CBS soap and don’t forget to check CDL often for the latest Young and the Restless spoilers, updates, and news.