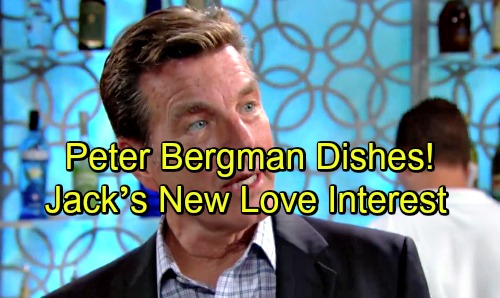 The Young and the Restless (Y&R) spoilers tease that Jack’s (Peter Bergman) quest for answers will continue. He has to know the truth about his biological father or he’ll never have peace. Jack’s counting on Phillip Chancellor (Donnelly Rhodes) being his bio dad, but there are no guarantees. Y&R still has a long and winding road in store, so fans had better buckle up!

In a recent interview with Michael Fairman, Peter Bergman dished on what’s ahead for his character. He provided some great clues about the twists that are coming up for Jack. For starters, Bergman was asked about the photo evidence and Dina’s (Marla Adams) confirmation. Jack might’ve been too quick to accept Daddy Phillip as the solution to all his problems.

“Jack is very eager for an answer,” Bergman admitted. “Could it be argued that he jumped on this as a possibility? Yes, and for a number of reasons.” Bergman talked about how low Jack felt after he learned John (Jerry Douglas) wasn’t his true father. Jack wants to be connected to a family again and he believes this could be his ticket. All that Chancellor power and respect appeal to him as well.

If Jack turns out to be wrong about Phillip, it could plunge him back into despair. Could Jack face another downward spiral? Bergman suggested that anything’s possible these days. “What we can expect from Jack now may change,” Bergman said. “Jack isn’t as bound by ‘what would Dad do’ as he once was.” Bergman added that we “may be surprised” by Jack’s attitude and actions soon enough.

Of course, Bergman had to address his longtime Young and the Restless costar’s departure. Eileen Davidson is leaving the role of Ashley and that’s a tough loss for the show as well as viewers. Bergman certainly hates to see Davidson go. He insisted that she’s the “real deal,” so he’s going to miss her terribly.

Finally, Bergman talked about something his character’s missing out on. Would he enjoy playing a love story again? Bergman said, “Jack should have a new love interest…I do feel like we are seeing two-thirds of Jack. There is another third of him that is completely unexplored and that’s a shame.”

Bergman noted that Y&R may not want to invest in an actress in his age range. However, he’d welcome her if they did. The Young and the Restless spoilers say Jack will need more support soon, so maybe a lovely lady will head in his direction.

It sounds like the CBS soap has some good stuff on the way for Jack. We’ll give you updates as other news comes in. Stick with Y&R and don’t forget to check CDL often for the latest Young and the Restless spoilers, updates, and news.