BY Heather Hughes on December 29, 2018 | Comments: one comment
Related : Soap Opera, Spoiler, Television, The Young and the Restless 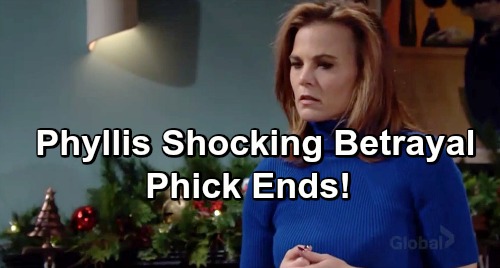 The Young and the Restless (Y&R) spoilers tease that Phyllis Summers (Gina Tognoni) will find herself in a tricky situation. She’s been saddled with the deadly posse for months, but she’d tried to stay in control.

Phyllis has certainly had to talk the others off the ledge a few times. They’ve taken turns playing the ringleader, but Phyllis is usually the one insisting that things have to stay under wraps.

Unfortunately, that won’t be possible for much longer. The Young and the Restless spoilers say the truth about J.T. Hellstrom’s (Thad Luckinbill) death will be revealed in the new year. Phyllis, Victoria Newman (Amelia Heinle), Nikki Newman (Melody Thomas Scott) and Sharon Newman (Sharon Case) will all be caught off guard by the next phase of the story.

After the bomb drops, the cover-up crew will have to deal with the consequences of their secret-keeping. Phyllis’ relationship with Nick Newman (Joshua Morrow) will be put to the test, but not just because she was hiding something so huge.

Y&R spoilers say the J.T. alliance will split apart, so Phyllis may think it’s every woman for herself! She’ll feel like she has to look out for number one here – as she always does.

Phyllis will have a lot to lose, which means she’ll have to make some tough choices. She’ll manage to get on the Newman clan’s bad side, so she’ll have a whole team of people standing against her. That definitely isn’t a good thing when Phyllis and the others are at risk of murder charges.

Phyllis will sense that she’s the most vulnerable in all this. She won’t have family members backing her up, so she’ll do whatever it takes to protect herself. Alas, that could alienate Nick and cost her their reunion. “Phick’s” romance will take another hit as this cover-up chaos brings more mysteries and surprises.

In the end, someone will come forward to take the blame for Nikki. Victor Newman (Eric Braeden) will be arrested and charged with J.T.’s murder during the week of December 31-January 4, so it may not be him.

It’d be weird for Y&R to charge him, have the truth come out and charge him again. Plus, it’s not like he’s coming forward. Rey Rosales (Jordi Vilasuso) is forcing Victor into this situation.

It sounds like a more shocking option will emerge, so the cover-up crew had better be ready for anything. The Young and the Restless spoilers say the excitement’s about to heat up in Genoa City. We’ll give you updates as other Y&R news comes in. Stick with the CBS soap and don’t forget to check CDL often for the latest Young and the Restless spoilers, updates and news.