The Young and the Restless Spoilers: Phyllis Unable To Control Summer – Billy Slipping Away Forever

BY Sean O'Brien on August 21, 2018 | Comments: one comment
Related : Soap Opera, Spoiler, Television, The Young and the Restless 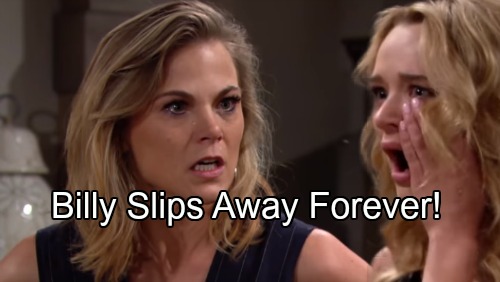 The Young and the Restless spoilers tease that Phyllis (Gina Tognoni) will soon learn everything that her daughter has been doing. Summer’s (Hunter King) plan to upend Philly and take Billy (Jason Thompson) is about to be furthered.

This summer has been one of tumult for Phyllis and Billy. On both business and personal fronts the formerly happy couple’s world’s began to crack. It’s impossible to know if current circumstances would have also resulted sans Summer’s intrusive return to Genoa City. Dealing with the facts and increasingly probably projections, a shocking relationship switch appears likely to occur based upon what did play out.

Summer recently determined that her mother hadn’t been bonding with Jack (Peter Bergman), as she hoped. Kyle (Michael Mealor) helped his frenemy to decipher that Nick (Joshua Morrow) was the man Phyllis recently spent romantic time with. That incensed Summer, which is the opposite of how children across the globe would have responded when learning that their parents apparently were growing closer.

Phyllis was staggered by Summer’s Phick reveal and then took a second shot to the heart. Summer tagged Phyllis as being responsible for the dysfunctional attitude she (Summer) has toward life.

Surely Phick and its various problems, along with the actions witnessed by Summer during her childhood years, did impact her. However, she’s been an adult for awhile, even in soapy time. An honest person wouldn’t blame one’s parents for everything. At what point is any adult in the Newman family responsible for their own behavior?

Phyllis’ face-slap confirms the rage she feels for her trouble-making daughter, while also eliciting a mirror on the past life of a character Tognoni now plays. But, as just noted, Phyllis used her own free will to commit a physical act against Summer. That means she, Phyllis, is responsible.

Philly was a highly unlikely pairing when it first formed. That came during the time Burgess Jenkins was ending his run on Y&R. Thompson became the recast. Together he and Tognoni developed on-screen chemistry that eventually made hardcore viewers look past comparisons to Michelle Stafford and Billy Miller, actors whose at-the-time alter egos would have never been interested in each other.

Billy has been steadfast in keeping Summer at bay. But he made the classic mistake of not immediately informing Phyllis of her daughter’s repeated, lascivious behavior toward him. If he’d done so, Summer’s game would have been over before it grated Billy’s mind.

Summer will use the Phick revival secret as yet another weapon to split Philly. Phyllis will then rightly be seen by Billy as responsible for betraying him. Unless a storyline red herring has been offered to the audience, Billy will then relent to Summer’s incessant suggestions as a form of revenge.