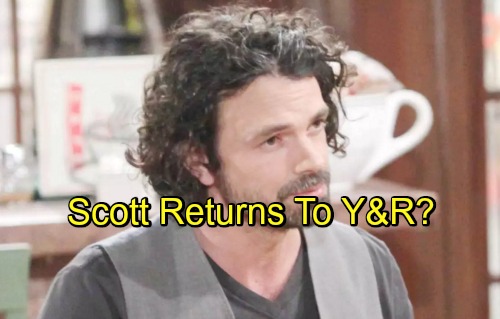 Often times, when someone leaves the cast that actor will announce the development and shortly thereafter adjust public tags to indicate past tense status, or replace Y&R references with whatever new project(s) are being undertaken. That point alone makes Hall’s return to the cast at least plausible, if not more so than that.

When departing, Hall responded to fan requests for when Scott might be coming back. He wrote, “It’s gonna be a while, I believe.”

A good amount of time has passed since Mr. Grainger left Genoa City behind and returned to (online) news-papering full-time. So, he could be coming back.

The effect on Sharon (Sharon Case) would probably be negligible. She’s with Nick (Joshua Morrow) and even when the J.T. (Thad Luckinbill) issue drops, her seeming fall groom will likely get over whatever outrage he’ll first utter.

But Abby, well that’s a different story. She parted on good terms with Scott and has since moved onto Arturo (Jason Canela). Abturo is an emerging couple. So time would tell whether Scabby Part II would form. That wonderfully icky image was far too funny to not write, so it was.

Hall last appeared as Scott earlier this year. He’d been unceremoniously dumped by Sharon, who learned from Nick that her post-Dylan (Steve Burton) replacement was romantically involved with Abby (Melissa Ordway). Mr. Grainger, who is Lauren’s (Tracey Bregman) son, was living with Sharon in the cottage at the time.

Y&R fans last saw Scott when he and Abby were in Paris. Scott became the owner of Hashtag, which was an original Newman Enterprises digital media outlet. That appeared to be the platform where Scott published his piece about Victor (Eric Braeden).

During his time in our fictional Wisconsin town, Scott was revealed to have been working as a contracted freelance operative for the government. Christine (Lauralee Bell) was pushing for his involvement in a new case, which laid out that unknown part of his life.

This SORAS’d version of Scott was written back into the show in 2017. Lauren desperately requested Victor’s help in paying ransom to free her son and his friend who were being held hostage in a deeply dangerous part of the world. Victor obliged with a multi-million dollar payoff and then accepted Scott’s request that he work off the money for him at Newman.

The working relationship between Scott and Victor soured. That, combined with Shott’s instant demise helped usher Hall’s character out of town in 2018. CDL is a leading source for everything linked to The Young and the Restless. Check back regularly for Y&R spoilers and news!