The Young and the Restless Spoilers: Sharon Compelled to Confess – Nikki and Phyllis Panic 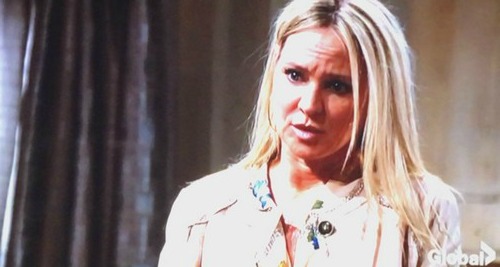 The Young and the Restless spoilers tease that Sharon (Sharon Case) will increasingly feel compelled to confess what she knows about J.T.’s (Thad Luckinbill) disappearance to Paul (Doug Davidson). Meanwhile, Nikki (Melody Thomas Scott) and Phyllis (Gina Tognoni) are increasingly worried that this forced ‘Girls Night In’ team member will betray them.

There’s no love lost between the three ladies who have been mentioned. None actually likes the others. However, the death of J.T. unexpectedly forced that trio and Victoria (Amelia Heinle), the actual only victim, to work together.

Nikki’s actions were justifiable. She saw that Vickie was facing immediate peril and acted like any parent, not just any mother, would. Nikki grabbed a blunt object, the fireplace poker, and whacked J.T. over the head. He fell backward and was dead, (or so he seemed to be).

Phyllis’ criminal mind then reacted. She became the loudest voice in the room and was thus adhered to. Yes, that principle often works within any type of group, be it male, female, among family members, supposed friends, neighbors, co-workers, or whatever gathering.

Nikki went along with Phyllis’ plan to cover up J.T.’s death because of one plot point that was spoken and another that remained hidden. The open dialogue had Phyllis’ arguing that Nikki would appear to be Victor’s (Eric Braeden) revenge attacker. Nikki agreed, while also not mentioning that J.T. opted to look the other way regarding her having embezzled from Victor, which could then be interpreted as her permanently removing an angered, potentially testifying witness from the globe.

Sharon pleaded with the contingent to call Paul, but her feelings went unheeded. However, the passage of time continues to press a truthful resolution through Sharon’s conscious and subconscious mind. She’s increasingly flashing back to that day and recently dreamed about J.T. reaching out from the grave.

Nick (Joshua Morrow) knows that something is off. His persistence in finding J.T. and proximity to Sharon at the cottage indicates that she won’t be able to withhold what she knows for long.

Phyllis’ threat to use Sharon’s mental health history against her appeared to provoke, rather than instill fear. Nikki holds no true quarter over her disliked ex-daughter-in-law either. With nothing to lose and the least involvement among the quartet, Sharon is compelled to confess.

Kudos to all involved in this tightly written and controversial storyline. All involved, both on- and off-screen are addressing interpretive and fully important topics. CDL is a leading source for everything linked to The Young and the Restless. Check back regularly for Y&R spoilers and news!