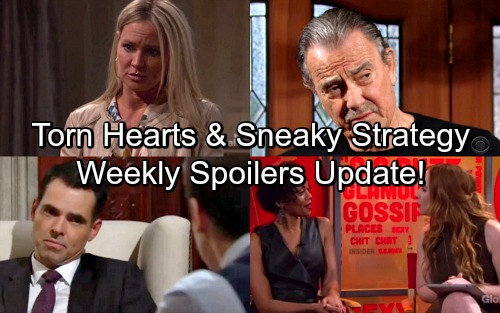 The Young and the Restless (Y&R) spoilers update for the week of April 30-May 4 tease that things will heat up in Genoa City. First, Hilary (Mishael Morgan) will make a confession to Phyllis (Gina Tognoni). She’ll admit that she was wrong about her pregnancy. Hilary will worry about telling Devon (Bryton James), but she’ll suddenly realize that maybe she doesn’t have to.

Y&R fans can expect Hilary to kick off a sneaky plan. She still has Devon’s sperm sample, so she’ll think she can use it and leave him out of the loop. Meanwhile, Nikki (Melody Thomas Scott) will part ways with Arturo (Jason Canela). Their hookups have been fun, but she’ll think she needs to appease Victor (Eric Braeden) and focus on her marriage.

Over with Kyle (Michael Mealor), he’ll sit down for an important meeting with Billy (Jason Thompson). The Young and the Restless spoilers say this will involve the blood-Abbott clause. Now that he knows Jack’s (Peter Bergman) paternity, Kyle will want to get rid that rule immediately. Billy will agree to help him, but Jack will be wary when Kyle pushes too hard.

Kyle will also meet with Victor by the end of the week. The Young and the Restless spoilers state that they’ll discuss using a secret weapon again Jack. Victor will test his ally’s loyalty, but Kyle may be hesitant to expose something that could rock Jack to the core.

Across town, Nick (Joshua Morrow) will struggle to resist Sharon (Sharon Case). She’s been dealing with a lot lately, so Nick will want to be there for her. That’ll lead to some warm moments and plenty of temptation.

Sharon will still have a hard time keeping her mouth shut about what happened to J.T. (Thad Luckinbell). However, Victoria (Amelia Heinle) may be the bigger concern this week. She’ll get grilled by Paul (Doug Davidson) and worry that the walls are closing in.

Victoria will wonder if she should just confess and get everyone else off the hook. That plan won’t go over well with the rest of the cover-up crew, so Victoria may change her mind and keep quiet. Over with Mariah (Camryn Grimes), she’ll have a memory flash from the night of J.T.’s death. Will she recall anything that could point to Sharon’s guilt? What about the others?