BY Marcy Cohen on November 24, 2018 | Comments: one comment
Related : Soap Opera, Spoiler, Television, The Young and the Restless 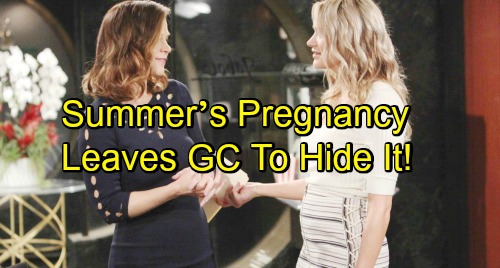 The Young and the Restless (Y&R) spoilers tease that Summer (Hunter King) has a job offer headed her way. Victor (Eric Braeden) was hoping to make it back for Thanksgiving this year, but he just couldn’t tear himself away from work. Business must be booming, so there’s more to be done in Singapore. In fact, Victor may need some help over there.

Y&R fans can expect Summer to accept a challenge this week. Over the phone, she’ll let Victor know that she’s taking the job. Nick (Joshua Morrow) won’t be please, but Summer will probably get in less trouble over there anyway. Of course, there’s a chance Summer will back out at some point. That’s especially true since Lola (Sasha Calle) and Kyle (Michael Mealor) could be on the outs soon.

However, Y&R could actually have a couple goals in mind here. For starters, King has another gig to keep up with. She’s got a role on a CBS primetime show called Life in Pieces. King actually missed a few days of shooting around the time of Nick and Sharon’s (Sharon Case) wedding. That’s why The Young and the Restless had to bring Bailey Corman in as a recast.

It’d probably be a pain to keep doing that if King can’t balance both. She might need to step away for a bit and come back once her schedule’s clear again. After all, there’s no guarantee this overseas job will work out. Summer could get bored with it and return to Genoa City eventually.

Still, we should at least consider another reason for Summer’s abrupt departure. She hooked up with Billy (Jason Thompson) in September, so it’s possible she’s pregnant. It’d be great for Y&R to send Summer off canvas with that secret. She could come back in a few months sporting quite the baby bump. Summer could even come back with the kid if they wait long enough.

It’s pretty much a given that Billy and Phyllis (Gina Tognoni) will reunite eventually. They have too much chemistry to waste! If they’re back together by the time Summer comes home, she could blow them up all over again. It’s be the perfect way to keep the drama going strong.

.⁦@ameliamheinle⁩ back on set with my long lost daughter!! pic.twitter.com/JHx6PKS6i4