BY Heather Hughes on June 6, 2018 | Comments: one comment
Related : Soap Opera, Spoiler, Television, The Young and the Restless 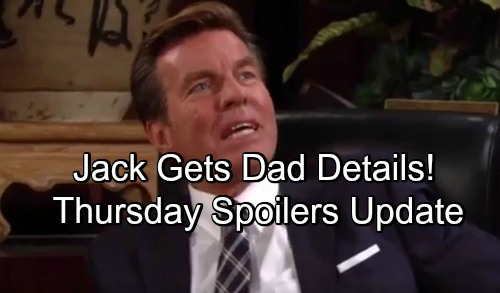 The Young and the Restless (Y&R) spoilers for Thursday, June 7, tease that Sharon (Sharon Case) won’t want to get in the way of Nick’s (Joshua Morrow) fight for custody. She’ll think her history could be a problem, so she’ll insist on walking away. However, Nick won’t be ready to give up on their romance. He’ll hope he can find another solution to the issues they’re facing.

Afterward, Nick will track down Nikki (Melody Thomas Scott) to complain about Victor’s actions. She’ll be rooting for Nick, but she’ll feel like Victor’s right about Sharon’s past. They’ll bicker, but Nikki will still offer some helpful guidance. To win, Nick needs to rely on his Newman roots and really get in that ruthless mindset.

Later, Michael (Christian LeBlanc) will stop by to fill Nick in. He’ll note that Victor (Eric Braeden) doesn’t know about this visit, but he wanted to give Nick a heads-up. Michael will admit that Victor wants him to do whatever it takes to win. He’ll suggest a private arbitration to avoid total humiliation for Sharon.

Back at the cottage, Sharon and Nick will revisit the breakup idea. The Young and the Restless spoilers say Nick just won’t be willing to let Sharon go. He’ll state that he’s taking Brittany’s advice and moving forward with the arbitration. Nick will hope that he can keep both Sharon and Christian when this is all over.

Other Y&R spoilers state that Jack (Peter Bergman) will enjoy a nice day out with Dina (Marla Adams). They’ll head to The Dive Bar for an important chat. Jack will ask a few questions about his biological father, so Dina will mention the Stardust Inn again. She’ll insist that she spent many wonderful afternoons there with her lover.

Dina will admit that her relationship with this man was pretty serious. She considered running away with him, but he ultimately pushed her to stay with John (Jerry Douglas). Dina will promise that love brought Jack into this world, but she still won’t be able to recall the man’s name.

Over with Lily, she’ll waltz in Charlie’s (Noah Alexander Gerry) room and discover Shauna (Camryn Hamm) in her son’s bed. Naturally, Lily will make the wrong assumption and head off to confront Charlie. She’ll drag Shauna along for this fierce faceoff at Hamilton-Winters.

The Young and the Restless spoilers say Lily will lash out as Cane (Daniel Goddard) enters. Neil (Kristoff St. John) will insist on having a calm, rational discussion. He’ll do his best to settle everybody down and promote peace. Charlie will explain that he didn’t have sex with Shauna. He was just helping her hideout since things are rough at home.

When Hilary gets updates, she’ll offer to let Shauna stay at Devon’s (Bryton James) penthouse for a while. Will a houseguest bring more drama for “Hevon”? We’ll keep you posted as other Y&R news comes in. Stick with the CBS soap and don’t forget to check CDL often for the latest Young and the Restless spoilers, updates, and news.