BY Heather Hughes on September 26, 2018 | Comments: one comment
Related : Soap Opera, Spoiler, Television, The Young and the Restless 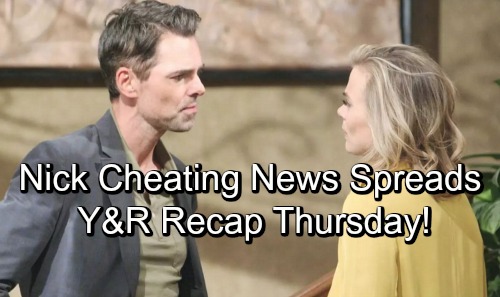 The Young and the Restless (Y&R) spoilers update and recap for Thursday, September 27, tease that Sharon (Sharon Case) and Nick (Joshua Morrow) will start their confessions. Before they can share too much, the fire alarm will suddenly ring out. As party guests scramble, Tessa (Cait Fairbanks) will emerge and insist that there’s no need to panic. The fire alarm was pulled, so you can probably guess who the culprit is!

When confronted, Phyllis (Gina Tognoni) will admit to this desperate move. She’ll argue that she’d do it again if it meant stopping Nick’s mistake. Phyllis will rant about how this will blow things up with Billy (Jason Thompson), too. Nick won’t particularly care, so Phyllis will mention Sharon and the kids. She’ll wonder if Nick really wants to cause heartache for the people he loves.

Phyllis will convince Nick to keep quiet, so that’ll leave Nikki (Melody Thomas Scott) and Victoria (Amelia Heinle) to work on Sharon. In the elevator, they’ll push Sharon to leave J.T. (Thad Luckinbill) in the past. Sharon’s admission could tear all their lives apart. Victoria and Nikki won’t want Sharon stirring up trouble, so they’ll urge her to just enjoy her wedding.

Meanwhile, Summer (Hunter King) and Kyle’s (Michael Mealor) chat will lead to a discovery. Mariah (Camryn Grimes) will overhear the one-night stand news, so she’ll accuse Summer of lying. She’ll threaten to tell Sharon about the gossip, but Kyle will warn her not to say anything. Mariah’s heart will sink as she realizes Nick and Phyllis actually hooked up.

Kyle will insist that it’s over now, so there’s no need to spill the beans. Of course, Summer will wonder if that’ll really be the end of it. She’ll imply that Nick and Phyllis could do it again. The Young and the Restless spoilers say Mariah will turn to Tessa for support. She won’t like the idea of hiding this from Sharon, but how can she destroy her own mother’s wedding?

Tessa will note that people screw up sometimes, but it’s possible to get on a better path. Mariah will concede that it sounds like it was a one-time deal. She’ll just worry since she can’t know for sure. Across town, Phyllis will meet up with Billy and learn he’s in deep. He’ll reveal that he borrowed $500,000 from Jabot, but now it’s all gone. As you might expected, Phyllis will be horrified!

Other Young and the Restless spoilers say Rey (Jordi Vilasuso) will find Sharon at the coffeehouse. She’ll suggest that her bachelorette party was a bit of a disaster. Sharon will also talk about the new house Nick picked out. She’ll share her moving concerns, so Rey will show some compassion.

Next, Rey will open up about his own relationship woes. He’s technically still married, but they have plenty of issues. When talk turns to Rey’s terrible living arrangements, Sharon will offer him the apartment above Crimson Lights.

Soon after, Y&R spoilers state that Nick will appear. Once he’s alone with Sharon, they’ll slow dance and fib about what they were going to say earlier. Nick and Sharon will promise to get it right this time around. They’ll talk about their dreams for the future before locking lips.

Unfortunately, the peace will be short-lived. It sounds like Sharon and Nick had better brace for some wedding shockers. We’ll give you updates as other Y&R details come in. Stay tuned to the CBS soap and don’t forget to check CDL often for the latest Young and the Restless spoilers, updates and news.