The Young and the Restless Spoilers: Victor Tampers with Next DNA Test – Jack’s a Blood Abbott, But Gets Duped by Enemy’s Trick

BY Marcy Cohen on May 10, 2018 | Comments: 3 comments
Related : Soap Opera, Spoiler, Television, The Young and the Restless 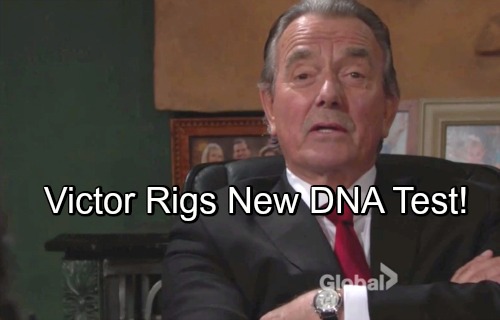 The Young and the Restless (Y&R) spoilers tease that Jack (Peter Bergman) will move forward with his DNA test plans. On Thursday’s episode, Neil (Kristoff St. John) urges Jack to stop drinking and get some answers. Jack won’t find the truth he’s seeking at the bottom of a bottle. He believes in his heart that he had blood ties to his father, Mal Young has hinted that Jack could be right about being an Abbott), so he needs another test if he wants to confirm that.

It seems Jack will order up another test to prove the first one wrong. He’ll be convinced that Ashley (Eileen Davidson) and Abby (Melissa Ordway) either botched this or set out to deceive him. Of course, Jack wouldn’t think the worst of them if he’d calm down and mull this over. Abby and Ashley were desperate to keep Jack out of the loop, so it’s obvious a revenge plot wasn’t afoot.

Regardless, Jack will focus on confirming his view of the situation. He’ll want to settle this once and for all. Jack will hope that the new test results reveal he’s John’s (Jerry Douglas) biological son. Since comparing Jack and Traci’s (Beth Maitland) hairbrush samples probably wasn’t the most reliable method, Jack may have something more concrete in mind.

Perhaps Jack will task someone with finding John’s DNA on file somewhere. There must be some way to make this happen. Perhaps Jack’s right about the first test being a mistake, but the next one may not be accurate either! Instead of an error, this time Jack could be the victim of test-tampering.

Y&R fans know how common DNA test drama is. Switches and manipulation happen all the time. The Young and the Restless spoilers say there are plenty of twists and turns ahead in this storyline, so this could be one of them. If the new test is indeed altered, Victor (Eric Braeden) may be to blame. He might go behind Kyle’s (Michael Mealor) back and deceive Jack with this dirty trick.

The truth would come out eventually, so that’d reignite Jack and Victor’s never-ending war. Will Victor target Jack with this sneaky plan? The Young and the Restless spoilers say some bombshells are brewing, so stay tuned. We’ll give you updates as other Y&R news comes in. Stick with the CBS soap and don’t forget to check CDL often for the latest Young and the Restless spoilers, updates, and news.