The Young and the Restless Spoilers: Week of December 3 – Extreme Danger, Tough Temptation and Crossed Lines 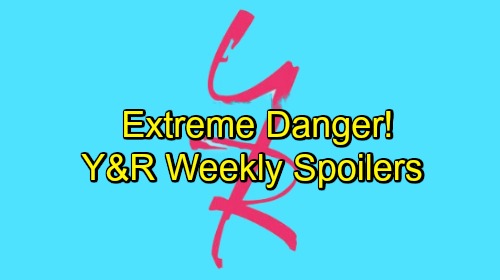 The Young and the Restless (Y&R) spoilers for the week of December 3-7 tease that we’ll see some scary threats and growing feelings. First, Sharon (Sharon Case) will push the boundaries of what’s acceptable. She’s set strict limits on how far she can go with Rey (Jordi Vilasuso), so this could involve him.

Sharon told Mariah (Camryn Grimes) she hadn’t crossed any lines, but that’s not exactly true. She shared a steamy kiss with Rey – a married man – just before Mia (Noemi Gonzalez) showed up in Genoa City. Since then, Sharon’s been trying to give Rey the space he needs to fix his marriage. Could they lock lips again in a moment of weakness? That’s certainly possible thanks to all Rey and Sharon’s chemistry.

Then again, this could be about overstepping with Mia. Sharon might offend her at the party Mia’s throwing this week. She’s trying to take the high road, but she can be pushed too far. Later, Arturo (Jason Canela) will rush to Mia’s defense. Will there be another faceoff between Mia and Abby (Melissa Ordway)? If Arturo sides with his ex this time, that could rock the boat in his current Y&R romance.

Other Young and the Restless spoilers say Fenmore “Fen” Baldwin (Zach Tinker) will return to GC. He’ll have plenty of surprised in store for his parents, Michael (Christian LeBlanc) and Lauren (Tracey E. Bregman). Over with Devon (Bryton James), he’ll open up to Nate (Brooks Darnell). Devon’s been putting up plenty of walls lately, but it sounds like they’ll finally come crumbling down.

Elsewhere, Jack (Peter Bergman) will turn on the charm with Kerry (Alice Hunter) again. He’s already quite smitten with the new woman in his life. Jack will hope to rev up Kerry’s interest with a sweet gesture or two. Things will be a bit frostier at Mariah and Tessa’s (Cait Fairbanks) place. Lies and broken trust have left these two with major damage to repair.

Nevertheless, Mariah must see a glimmer of hope or else she wouldn’t be putting the work in. Despite the tension, maybe they’ll make a hint of progress. Across town, Nikki (Melody Thomas Scott) will find J.T.’s (Thad Luckinbill) dirty clothes spread out on her bed. Those clothes will be handed over to Rey eventually, so some tricky questions will have to be answered.

Later, Victoria (Amelia Heinle) and Nikki will get a huge shock. They’ll spot the Newman stables burning down, which should intensify their fears. It’s clear that someone is messing with the cover-up crew in a big way. Nikki will battle temptation this week, so she may consider hitting the bottle again. No one can blame Nikki for wanting a drink with all this stress, but she’ll probably fight off her desires.

By the end of the week, Nikki will be physically assaulted! The Young and the Restless fans won’t want to miss the next chapter of this shocking story. We’ll give you updates as other Y&R news comes in. Stay tuned to the CBS soap and don’t forget to check CDL often for the latest Young and the Restless spoilers, updates and news.