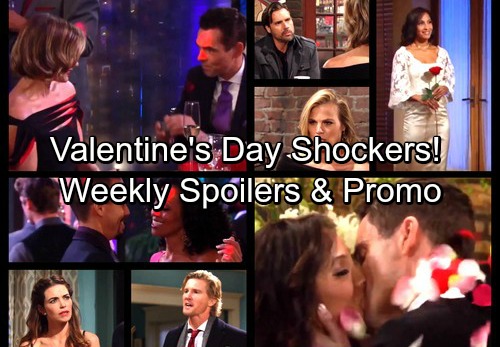 The Young and the Restless (Y&R) spoilers for the week of February 12-16 tease that Nick (Joshua Morrow) will go back and forth on Chelsea’s (Melissa Claire Egan) guilt. He’ll have some serious questions about whether she’s playing him or not. Nick just won’t be sure about anything anymore.

The week will start off pretty well for Chelsea. After telling a few more fibs, she’ll manage to convince Nick of her devotion. The Young and the Restless spoilers say they’ll end the chat on solid ground.

However, Phyllis (Gina Tognoni) will slowly chip away at the trust between them. She’ll reveal some things that could change Nick’s mind. After Victor (Eric Braeden) returns the cash to Lauren (Tracey E. Bregman), that’ll really seal the deal for Phyllis. She’ll believe Victor’s involvement points straight in Chelsea’s direction.

Phyllis will likely fill Nick in on the new developments and once again push him to see the light. Nick will have to admit he has persistent doubts about Chelsea. The Young and the Restless spoilers say those doubts will spark a major argument at the Valentine’s Day party.

Since Nick doesn’t trust her, Chelsea will hiss that maybe they should go their separate ways. Nevertheless, Chelsea will also propose to Nick at some point this week. It’s not clear whether it’ll come before or after the fight, but this is definitely a huge mess!

Fortunately, a few other couples will be on cloud nine. The Young and the Restless spoilers state that Cane (Daniel Goddard) and Lily (Christel Khalil) will happily renew their vows. Some drama is looming for these two, so they should take advantage of this bliss while it lasts.

Hilary (Mishael Morgan) will also share a secret with Phyllis this week. It looks like she’ll think Billy’s (Jason Thompson) about to propose. Y&R’s weekly promo appears to show Billy offering Phyllis a ring. Will they enjoy a Valentine’s Day engagement? Regardless, Phyllis may have marriage on her mind after this!

J.T. (Thad Luckinbell) and Victoria (Amelia Heinle) will face some bumps in the road, but they’ll attempt to get past them. After a fierce faceoff, they’ll make amends with a hot sex session. Y&R spoilers say Victoria and J.T. still have a lot to learn about each other. Stay tuned to see how long they can keep this relationship intact.

It sounds like some great episodes are on the way. We’ll give you updates as other news comes in. Stick with the CBS soap and don’t forget to check CDL often for the latest Young and the Restless spoilers, updates and news.