The Young and the Restless Spoilers: Will Ashley Join HWG – Are Devon and Neil Different Than Jack and Victor? 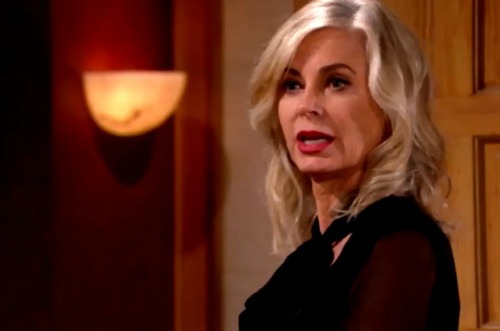 The Young and the Restless spoilers tease that after Victor (Eric Braeden) realizes that Vickie (Amelia Heinle) betrayed him, he’ll seek to make amends with Ashley (Eileen Davidson). She’s threatening legal action at the moment and isn’t likely to return to Newman Enterprises, which establishes the Hamilton Winters Group as an appealing alternative.

Devon (Bryton James) and Neil (Kristoff St. John) have positioned HWG for great things, or so they claim. Securing someone with Ashley’s credentials would further enhances this widening conglomerate’s reputation in the business world, while also meeting subjective promotional intent.

Ashley came to believe that her brother Jack (Peter Bergman) was evil. She also believes the same about Victor. Said beliefs could make her leery of Devon and Neil, since they’re males as well.

Jack took the reigns of his father’s business years ago. In Ashley’s mind, her brother has always exhibited a sense of entitlement. She fails to recognize what he’s accomplished, which underscores the sibling rivalry and therefore her bias.

Yes, Jack has wronged her many times. But Ashley’s goal has been and remains to best him. She wouldn’t choose to be co-CEO with her brother any more than he would agree to that power-share.

Victor is deceptive, but he’s also the father of Ashley’s daughter, Abby (Melissa Ordway). That plays into everything and always has.

The Moustache wanted to pounce on Ashley’s availability after she left Jabot because of what she could bring to Newman. That, more so than his other considerations, which included personal matters, allowed Victor to make the offer which Ashley accepted, on her terms.

In the face of seeming evidence that was presented to Victor would Ashley have allowed any newly hired executive, who was also given a seat on the Board of Directors, to stay on at Jabot if she was running the company? No. But Ashley, like anyone, isn’t capable of being objective about herself.

So, she’ll consider joining HWG. One of the reasons Devon and Neil will consider her is because of her gender and skill set. They believe women deserve preferences based upon past injustices.

But in order to avoid looking like a hypocrite, Ashley could realize that if she joins HWG that she’ll likely never head that company. Despite their intentions, Devon and Neil aren’t likely to cede power to Ashley as they too, like Jack and Victor, are actually interested in promoting their own personal goals under the pretense of balance.

Ah, the business world. That’s where change has and continues to mean ego and money no matter who is in charge. CDL is a leading source for everything linked to The Young and the Restless. Check back regularly for Y&R spoilers and news!